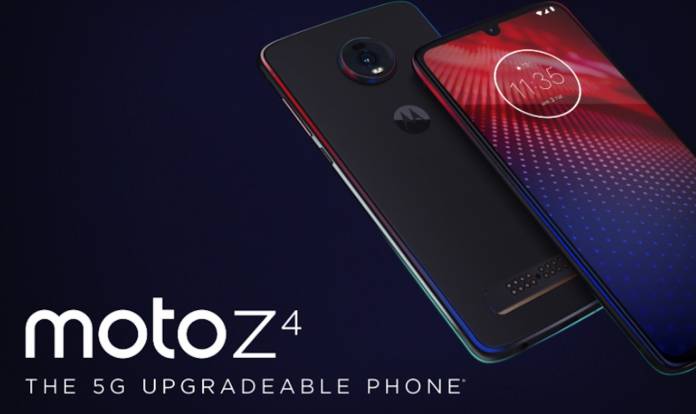 Finally and officially, Motorola has announced the new Moto Z4. Verizon was first to inform us because it has to share the good news to its loyal subscribers and attract future customers. Motorola is excited to tell the world that the Moto Mod technology has reached its full potential when the 5G Moto Mod was released last month. Another device is joining the 5G phone list: the Moto Z4. Of course, it will be 5G-enabled with the same 5G moto mod.

The new Moto Z4 comes with specs that are almost premium. It’s not full premium because the processor is only a Snapdragon 675 although other features are already impressive. The phone boasts a 6.4-inch OLED display with an on-screen fingerprint scanner, 1080 x 2340 pixel resolution, 19.5:9 aspect ratio, Corning Gorilla Glass 3, 128GB onboard storage, 4GB of RAM, and a 3600mAh battery.

When it comes to imaging, the Moto Z4 features a single 48MP camera sensor with f/1.7 aperture, PDAF, OIS, HDR, panorama, and a dual-LED dual-tone flash. The selfie camera is also impressive at 25MP with f/2.0 aperture. The cameras are high-specced but we have yet to try them. We’ll only be satisfied when we see the real results.

Motorola is releasing two variants: an unlocked version and a Verizon model. They’re basically the same but you’re given the choice on what network to use. If you order for one now, you may receive a free moto 360 camera mod.

Moto Z4 becomes more powerful with the moto mod system. The 5G Moto Mod add-on accessory is enough to add speed to the phone’s mobile Internet connection. You can only take advantage of it if there’s a 5G connection available. In the US, there is the Verizon 5G Ultra Wideband.

Motorola lists the Moto Z4 with a $499.99 price tag. You can get it for as low as $21 per month. Pre-order is now open. Meanwhile, Verizon offers the phone for $20.83/month for 24 months with the Verizon Device Payment or $10/month if you switch to Verizon or get a new line.