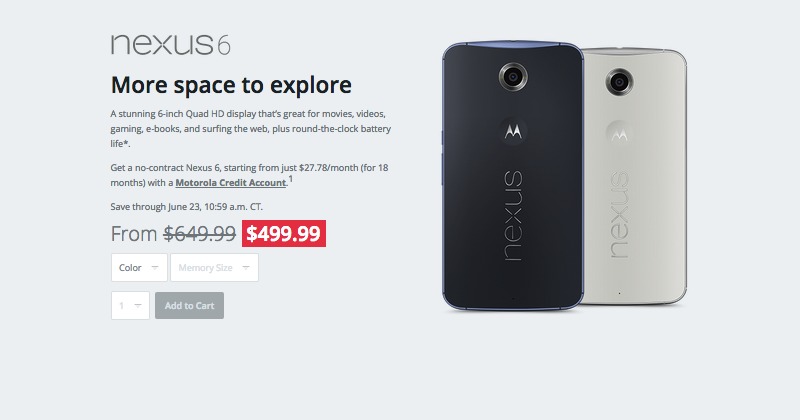 The month of June started with the Motorola-made Nexus 6 getting a price cut on both Amazon and Google Store. It’s now $499 after getting a $150 discount. It’s somehow expected but it’s only now that Motorola is listing the smartphone with the same price.

From $649.99, the Nexus 6 now comes with a $499.99 price tag on Motorola’s website. This move makes me want to believe that the next-generation Nexus model is arriving anytime soon. And since the Nexus 6 is the only phone supported on the Project Fi, Google could also be using this strategy to attract more subscribers to its very own cellular service.

We have no idea how the Nexus 6 is doing in terms of sale but we know it’s the best choice for those looking for a Nexus phone. After a short delay last year, the model soon became available in the US courtesy of Google, Amazon, T-Mobile, US Cellular, and Verizon. Six other countries also got the Nexus 6. Phone is now available in Austria, Finland, Denmark, Norway, Portugal, and Ireland.

We may be thinking of the next Nexus phone’s arrival but it might take a while because the current Nexus 6 phone has been out for only a few months. It may be too early for a new model but as with any price cut, this one is more than welcome.