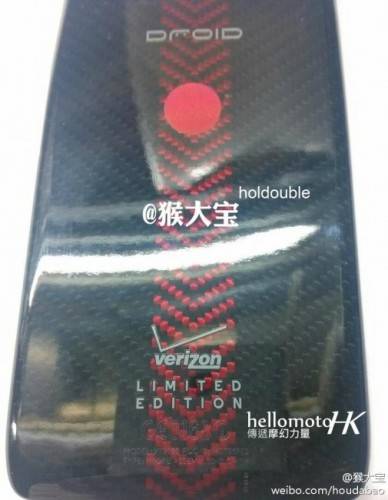 With Motorola and Verizon set to announce a slew of new devices tomorrow, today we’re seeing our first actual image of the hardware out in the wild. While we’ve seen countless leaks of the upcoming DROID ULTRA, and even some press images, this is the first sighting in the wild. Complete with a red racing stripe and all, the ULTRA is what we’re most looking forward to seeing tomorrow.

A press image leaked last week that had us doubting its legitimacy with a red racing stripe on the back of the new handset, and now it looks to be confirmed. While Verizon has done red accents in the past, they haven’t as of late with the Moto DROID lineup, but that’s about to change.

According to the image above there will be a “limited edition” ULTRA or MAXX with a red racing stripe down the back, but that’s about all we know thus far. Tomorrow in both New York City and SF Verizon and Motorola will be announcing the new DROID lineup, and this may or may not make an appearance.

Most current leaks and rumors are pointing towards a DROID MINI, DROID ULTRA, and of course a big battery packing DROID MAXX or ULTRA MAXX to all be unveiled tomorrow. Then, our latest tip revealed the new DROID lineup of smartphone will be available to pre-order right away, and will start shipping August 8th. Who’s excited? Stay tuned as we’ll have all the details as they unfold tomorrow.