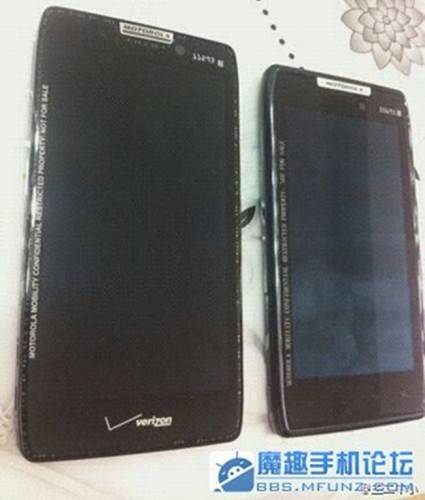 The mysterious DROID Fighter has popped up on a few internal Verizon documents for the last few weeks, but until now we had no idea what it was – no specs, no date, not even a manufacturer. All of a sudden we’ve got a bevvy of information all at once, and what it boils down to is a slightly upgraded version of the Motorola DROID RAZR MAXX with possible Ice Cream Sandwich implications. The photo below was spotted by PhoneHK, with the phone on the left being the new DROID Fighter and the one on the right being the Motorola RAZR. See if you can spot the family resemblance.

You’ll immediately notice that the purported Fighter has an even larger screen, given by the source as 4.6 inches. This is achieved with a slightly larger body (though not that much larger – the RAZR has a pretty big bezel) and the absence of physical navigation keys, Galaxy Nexus-style. That implies that the Fighter may be running Ice Cream Sandwich at launch. Aside from a vaguely “high definition screen” (probably 720p) and a MAXX-matching 3300mAh battery, there’s no other hard details.

The last time we saw the DROID Fighter’s name it was slated for an April 12th date, though whether that’s a testing schedule, announcement or release date isn’t currently known. None of this has been confirmed, of course, but with Moto’s heavy use of Verizon’s DROID line and the other hints we’ve seen, the hardware at least looks to be real. There’s no telling how yet another RAZR variant will affect Verizon’s lineup, even without the iconic name tagging along with it – it’s been less than two months since the last one, after all. If Motorola releases a tweaked version of the MAXX with ICe Cream Sandwich six months or more before the DROID RAZR and DROID RAZR MAXX are slated to get the upgrade, current owners won’t be happy.