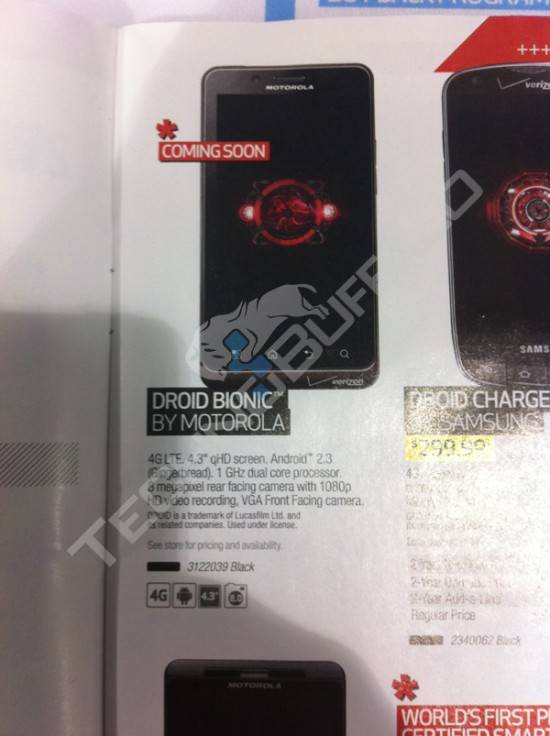 Anyone heard of this phone? It’s called the DROID Bionic and I don’t think I’ve seen much about this phone lately. Almost daily now we have seen a leak or a photo of some sort and it’s to the point of almost irritation. Can Verizon just release this bad boy already? Today new pictures are popping up from multiple sources showing the Droid Bionic as “coming soon” in Best Buy ad magazines and more.

The Motorola Droid Bionic is only what like 4 months late to the market, unless we are counting when we saw it at CES but that wouldn’t really be fair. Just to help you readers out here are a few of the recent leaks. We saw some impressive speedtest results a few days ago, leaked photos of it and the Droid HD, and more recently a tips and guide manual. Latest reports are still suggesting a September launch date although we did hear some rumors of it coming late August but that is doubtful.

So what does everything think about all these leaks so far? Are there so many that you don’t really care to see a flyer or Best Buy ad, or are all these leaks that are happening almost daily a good sign that it may be coming sooner than we think? I’m not trying to rain on the Bionic and its parade but I’m already switching my focus to the Droid HD and the Samsung Nexus Prime, but that’s just me.

Either way this phone should and better launch soon, if for some odd reason they delay it again I don’t think it would end well for Motorola or Verizon.