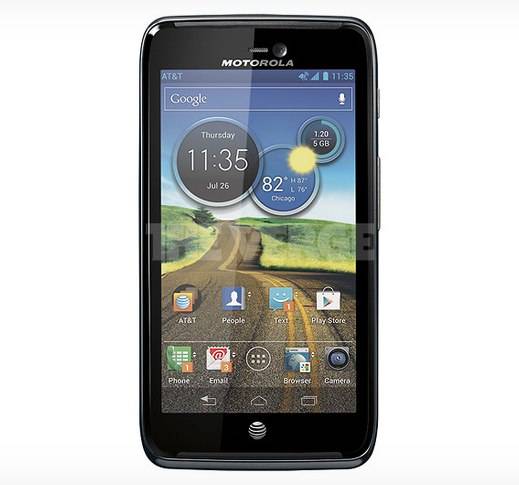 It looks like Motorola’s next big flagship launch for AT&T has leaked this morning. We’ve heard the codename Dinara for a top tier Motorola phone since as early as last July, but if leaks from the folks at The Verge are correct it will finally be coming possibly this summer as the Motorola Atrix 3 LTE for AT&T.

In a way you could call this phone the RAZR HD but for AT&T here in the states since we’ve seen a very similar model over in China. From what we can see this will be Motorola’s next big phone for AT&T. Complete with a 4.3 or 4.5-inch 720p HD display, Android 4.0 Ice Cream Sandwich, on-screen navigation keys (no capacitive or hardware buttons), clearly some Moto Blur style user interface changes, and more.

If past leaks are accurate this phone will most likely come to market running on Qualcomm’s 1.5 GHz dual-core S4 processor found inside the Galaxy S III, HTC One S, and more for its 4G LTE capabilities. Previous rumors suggested a huge 13 megapixel camera and 2 megapixel front for video but for now that’s not been confirmed. If the tipster, as well as the on-screen weather and date widget are accurate, we could be seeing this phone around late July (26th) over on AT&T.