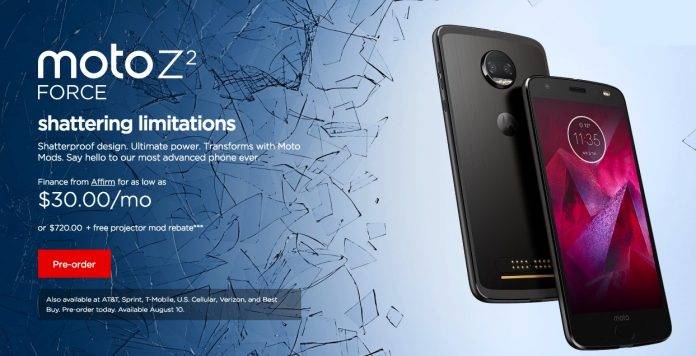 The Moto Z2 Force was introduced only recently by Lenovo and Motorola, complete with a Snapdragon 835 processor, dual cameras, and a shatterproof display. The latter is what makes it more attractive to those looking for a durable phone. It can survive drops but unfortunately and surprisingly, it’s not scratch proof. Motorola said it’s been working on an improvement as it’s already due for an update.

Motorola originally listed the Moto Z2 Force with an $800 price tag but now it’s down to $720. It even comes with a free projector mod rebate. It’s unlocked which means you can use it on other mobile networks such as Verizon, T-Mobile US Cellular, AT&T, and Best Buy. The phone will roll out beginning August 10 while pre-order is now open.

If you can’t pay in full, you can get financing from Affirm and pay as little as $30 per month for up to 24 months at O%. As with other Moto phones, this one can play well with Moto Mods. The device also boasts of dual 12MP camera sensors for a crisper quality of images. Features also include a 5.5-inch Quad HD 1440p Super AMOLED display, 7000 series aluminum unibody, all-day battery with TurboPower charging, and Qualcomm Snapdragon 835 processor.