Finally and officially, the new Moto Z2 Force is announced. This is after countless of rumors and leaks about the Moto phone that takes advantage of Motorola’s ShatterShield technology. It comes after the Moto Z2 Play which was introduced only last month, ready to play with new Moto Mods. The new Force Edition still promises the same durability from the previous model–your phone screen will never shatter.

The Moto Z2 Force sports an all-metal and slim design. There are dual 12MP rear cameras (color + monochrome), crisp display, and super fast connectivity. The Moto ShatterShield technology is on the 5.5-inch Quad HD AMOLED screen. This is a Moto Z Force so it’s durable, thanks to the 7000 series aluminum material used.

Making the Moto Z2 Force more powerful is the all-day battery life courtesy of the 2730mAh batt. A few minutes of charging will already give the device about eight hours of extra juice as made possible by the TurboPower charging tech. Other features of the smartphone include the Qualcomm Snapdragon 835 processor, Gigabit LTE, 4GB RAM, and a fingerprint reader. The device supports new Moto Mods including the new $299 360 Camera Moto Mod. Other mods are available to transform the Moto Z2 Force into a battery powerhouse, video projector, stereo speaker, or gaming console.

Motorola usually offers the Z Force editions as a Verizon exclusive but for this year, the phone will also be ready from all major carriers. Release date will be August 10. Pricing is set at $750 but you can get it on installment at $30/month for two years. T-Mobile’s JUMP! on Demand Pricing (JOD) is $0 down at $34/month for 18 months. 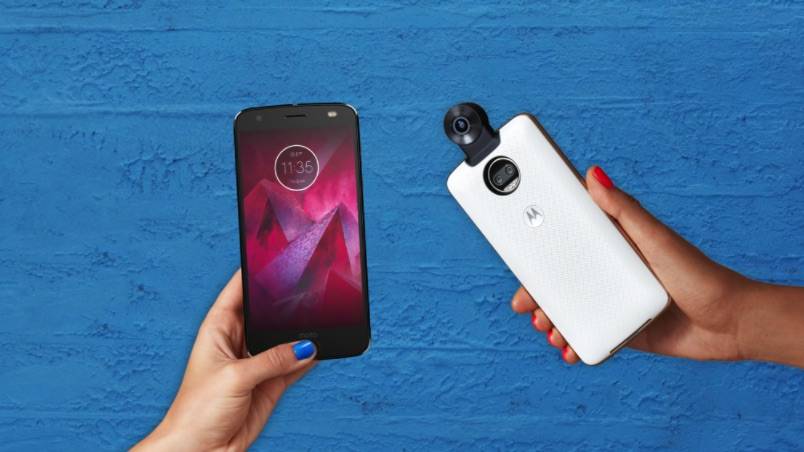 You can pre-order for the Moto Z2 Force starting today. If you buy two units of Moto Z2 Force on EIP, you will receive a Prepaid MasterCard Card worth $750 so it’s ‘Buy one, get one’. The Insta-Share Projector will be given by Motorola at no extra cost if you buy a Moto Z2 Force until September 9.

The Moto Z2 Force will also be available at Motorola.com AT&T, US Cellular, and Best Buy stores beginning on August 10.