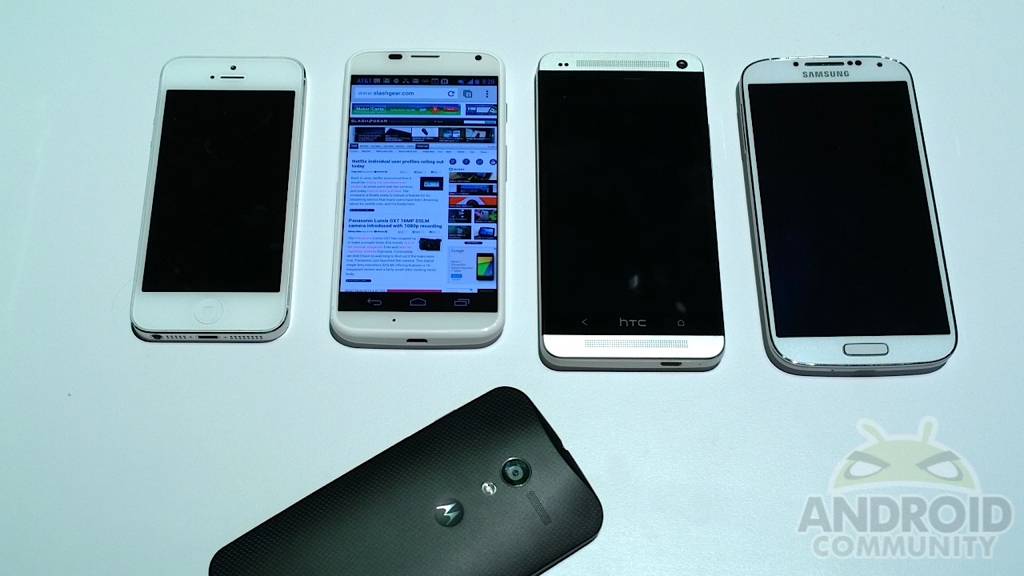 We’ve already seen a press image or two of the Moto X sitting next to the competition, but now that it’s out and in the wild, we figured a few more were in order. We already know all the details, as Motorola announced their new Moto X yesterday. So now, how about a few pictures comparing the overall size and general look vs the competition.

At this point there’s no missing pieces to this puzzle. We know all there is to know about the new Moto X, nothing is left to the imagination (except for why it costs so much) and we’ll have to simply wait and see how well the phone sells. In the meantime however, lets take a peek at the iPhone 5, Galaxy S4, and HTC One vs Moto’s new top dog.

We all know the specs of these devices, but just in case we’ll mention a few noteworthy parts. The iPhone 5 has a 4-inch display, the HTC One has a 4.7-inch front, and the Galaxy S4 comes in the biggest with 5-inches of 1080p glory. Compare that to the 4.7-inch Moto X, and you’ll see just how impressive the phones design is. They’ve managed to make a compact and comfortable phone here, and the screen size is quite large given the small package. 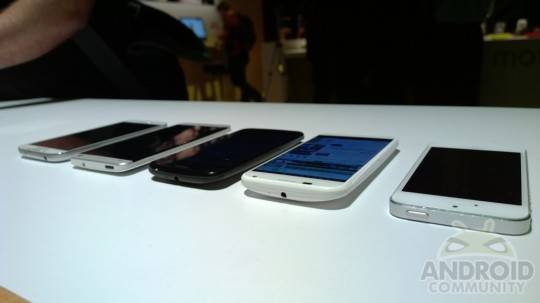 Dual-core vs quad-core, 720 vs 1080p HD displays, and even a smaller battery than the competition. You all know the story, you know the specs (and if not here’s more details) so instead of running through everything we just figured a few different angles comparing the phones was in order.

With the Moto X you get a phone designed from the ground up my Google and Motorola. It’s nearly stock Android, updates should (hopefully) be quick, and it has some next-gen always on features for instant voice actions using Google Now. Motorola promises 24 hours of battery life with “mixed and average” usage, and that dual-core processor is actually extremely powerful thanks to the GPU and X8 computing system in place.

To tech fans and enthusiasts like us it might be a hard sale vs the Galaxy S4 or HTC One, but we have a feeling Motorola is going after everyone else. Without talking specs, if you’re at an AT&T store, the Moto X is a great looking phone. To be honest, it’s great in general, so we’ll just have to wait and see how well it actually does in the market vs what’s readily available.