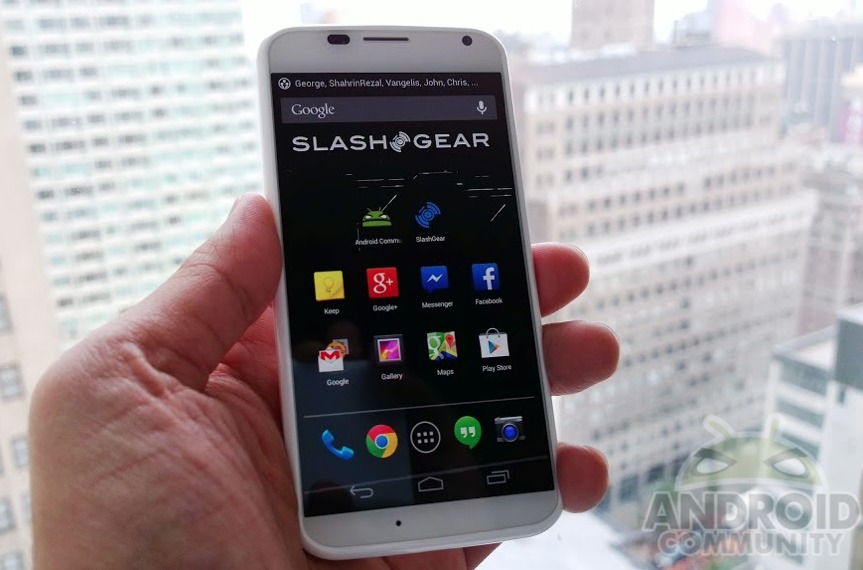 Just announced this afternoon is the highly anticipated new Moto X smartphone from the partnership between Google and Motorola. We’ve been following this new phone (and the new Motorola) for a while now, but this afternoon everything is finally official. Can Google help Motorola get back on track to be a top player in the mobile game dominated by Samsung and Apple? This new Moto X surely is headed in the right direction. Below we’ll be going over a little of everything, so check it out.

Motorola hasn’t just built another smartphone here, the Moto X is their first contextually aware smartphone packing tons of next-gen technology all into one device. From their new clear pixel camera, Motorola X8 computing processor under the hood, and tons of sensors to make this the smartest device yet. We’ll be focusing on the hardware, and then the touchless control, camera, active display, and of course everything else. The new “breathing” mode is quite neat too.

As we all knew from previous leaks, the Moto X comes complete with a 4.7-inch AMOLED display with a 1280 x 720p HD resolution. With 316 PPI it isn’t 1080p, but then again the pixel race is arguable. It has an active display, but more on that below. Under the hood is the 1.7 GHz Snapdragon S4 Pro dual-core processor, but just like we stated before, don’t let the phrase “dual-core” concern you. This is fast, powerful, and efficient. You’ll get the same GPU from the Snapdragon 600, and performance is excellent. It comes with 2GB of RAM, 16 and 32GB configurations, no micro-SD slot) and more. There’s a 10 megapixel camera on the rear, 2 up front, and a 2,200 mAh battery under the hood. This is all running a near-stock build of Android 4.2.2 Jelly Bean. Hopefully 4.3 will be coming soon. 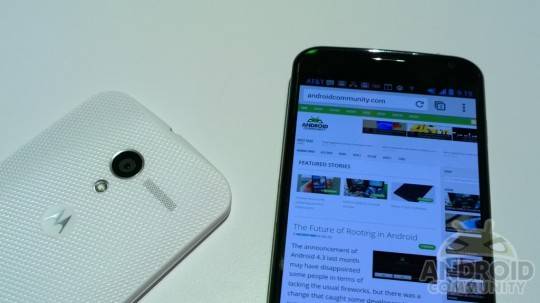 The Moto X will be available on all 5 US carriers in both Woven black and white colors, and all those customizations will be exclusive to AT&T, but we’ll talk more about that soon. Their customization site will have 16 different colors for the back, tons of different TRIM options, engravings, and even wood and ceramic backs coming in Q4. So now lets move on to the other good stuff. In case you’re wondering, the stock versions white and black back is of course Dupont Kevlar just like most Moto phones.

Using an array of sensors, as well as two new chips inside the processor (language and contextual computing cores) this device has tons of “touchless” features, and a touchless Google Now. And that will be a big selling point for Motorola. You can navigate the device without ever touching it. Gesture controls for navigation, make and answer calls using gestures and Google Now. “Ok, Google Now, call …” as well as all those Google Now commands we previously loved. They’ve added tons more, and see a few screenshots below to better understand. 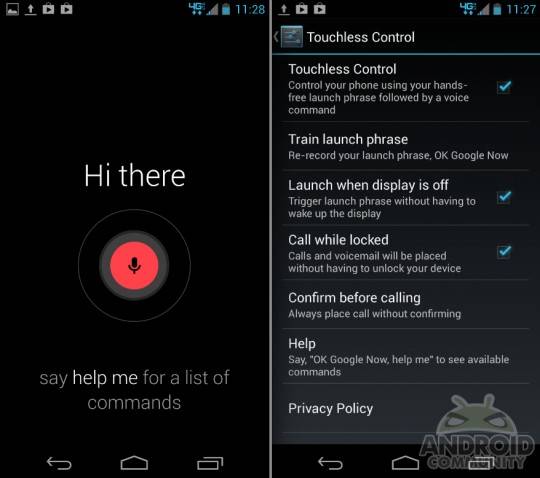 You’ll be able to do nearly everything you’d like using your voice, all through Google Now with their language learning core. All of this work on their own cores, and are extremely battery efficient. So that Snapdragon won’t be firing up and wasting battery life. Sadly all the voice and touchless features require a data connection, but that was sort of expected. There is some set-up to get the touchless and voice commands all perfect, but this will ensure the optimal experience for all users.

So far in our limited time with the Moto X, this has all worked rather well. Once all set up and you go through the 3 step training process, everything is a breeze. There’s 3 noise cancellation mics to block out others, and listen to the users voice specifically, if you’d like. This all works up to 15 feet away. However there’s certain functions that will require the screen to be unlocked, so a pin security might cause some issues. 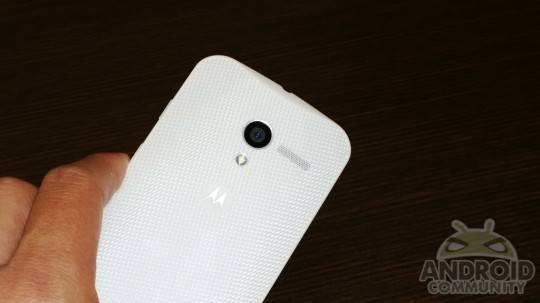 The Moto X has a brand new 10 megapixel f/2.0 RGBc “clear pixel” camera that has an additional clear sensor allowing 70% more light. This will allow for faster photos, better quality, and improved low-light photography. Not only that, but Moto’s software and sensor tweaks making the X “smart” really come in handy. From the quick capture mode and more. Pull the phone out of your pocket and a flip of the wrist twice enabled the camera, then one tap on the screen and you’ve instantly taken a great photo. It’s fast, good quality, and extremely easy.

The camera features 1080p video recording in 60 fps and 30 fps for an instant slow motion playback feature. Burst mode as shown above was impressive, the 4x ditial zoom was average at best, and we have panoramic and auto HDR modes as well. We’ll need more time with this camera, that’s for sure.

The active display and new “breathing mode” was shown off in a leaked video earlier this month by Rogers Wireless. But if you missed that we’ll explain these neat features. Using those extra processing cores and integrated sensors the Moto X knows when its in a pocket, or a purse. Along with all those touchless voice controls, the breathing mode will share info on screen, in a low-power state to save battery, all without you turning on the display or touching a button. 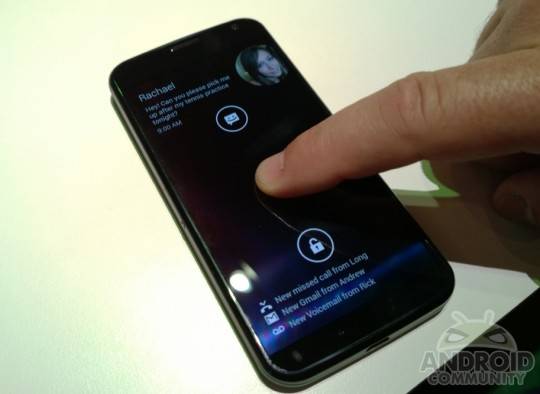 Turn the phone over on a table and it will gently light up the display in a low power “breathing mode” which shows the time, date, notifications such as incoming SMS messages or emails, and it cycles through this as well. Press any of the cycled notifications, for example a text message, and slide up to instantly enter and respond in the messaging app of choice. All this is done with the low-power cores, and shouldn’t waste battery. Instead of waking up your phone a few hundred times a day, get the info you need without sacrificing the battery thanks to the breathing mode.

All of these features are highly customizable, and can be tailored around your favorite apps. Pretty interesting stuff here, and we’ll have tons more videos coming up quick.

Since you’re all probably wondering about this dual-core processor, we wanted to ease your minds. Obviously benchmarks are only a small role, and the stock Jelly Bean is blazing fast, no questions asked. However, many still want to see just how it stacks up against the competition. The 1.7 GHz dual-core and Adreno 320 quad-core GPU held their own just fine, 2GB probably helps, and the results were above average, but not the highest we’ve seen. 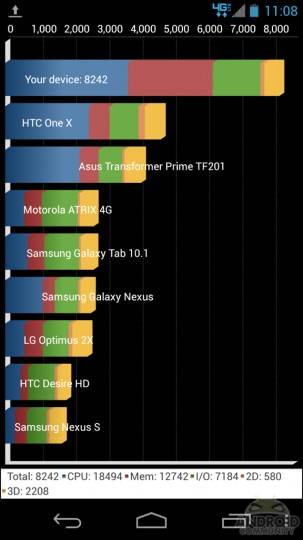 Overall it’s the combination of hardware and software that is important here. Motorola’s new X8 computing processor we’ve talked about all week is playing a big role here, and we’ll be testing gaming, performance, and battery life over the weekend.

So what do we think so far? We absolutely love it! Google and Motorola have done an excellent job. For one, the phone just feels top notch. The build quality is stellar, and the curves are some of the best we’ve used to date. This is seriously one comfortable phone in the hand, more so than most. The size feels just right, and isn’t massive like a Galaxy Note. The 4.7-inch edge-to-edge display takes up 70% of the phone, and they kept bezels to a minimum, and we like it.

The Dupont Kevlar back has a slight soft touch to it, and feels great in your hands. You really need to hold this phone guys! One thing we want to make very clear is the near stock version of Android 4.2.2 Jelly Bean here. There’s no crazy Moto Blur or UI tweaks on board. This is almost as pure as it gets, while still having a few add-ons, and performance has really been stellar for us. There’s absolutely zero lag or stuttering, and this is butter smooth through and through. Sadly the bootloaders are locked down tight in the usual Motorola fashion, but unlocked dev models will be available right from Motorola. 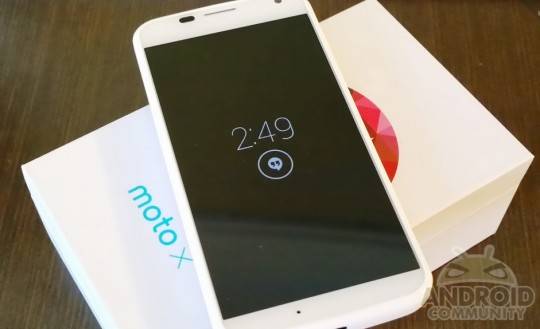 We have the Verizon Moto X in our hands, so feel free to drop any and all questions you may have in the comment box below, and we’ll try our darndest to answer them all. As a reminder, these hit the streets late August on all 5 major carriers for $199 and $249 on contract, for the 16 and 32GB models.