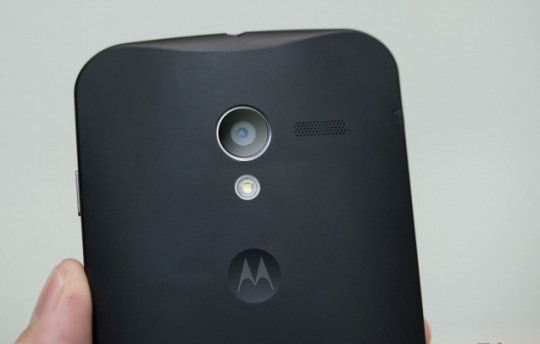 The Moto X smartphone is still a mystery for now, although various different leaks have revealed a good portion of what we can expect. One spec that had many confused was the odd 10 megapixel camera. Considering all other manufacturers went from 8 right to 13 MP. today we’re hearing that is because Motorola’s new lineup of smartphone will sport a “Clear Pixel” camera.

According to Taylor Wimblerly over on Google+, Moto’s new phones will sport a clear pixel camera complete with gesture controls. We’ve heard things in the past like flicking the phone to instantly turn on the camera and shoot photos quick, and easy, so that makes sense.

Taylor, previously with AndroidAndMe, has been spot on in the past ahead of everyone else regarding multiple customizations and colors coming to the Moto X, and other leaks. So it’s safe to say he’s getting some rather accurate inside information about the upcoming device. This Clear Pixel lens is nothing like HTC’s UltraPixel, and we had to do some searching to figure it out. One comment in Taylor’s post on G+ had this to say:

Today’s cameras detect light with an array of red, green and blue pixels–which each see just one color. That means each pixel is ignoring two-thirds of the incoming light. The new sensor adds a panchromatic or “clear” pixel that detects all wavelengths of visible light, making it much more sensitive to the overall light level.

The comment then goes on to mention this technology has been slowly being developed by Kodak since 2008, and will allow for great photos. “Another benefit is that greater light sensitivity allows faster shutter speeds, reducing the blur in action shots.” Sounds nice right? Google’s own Vic Gundotra recently said future phones will have “insanely great cameras” and we have a feeling this is what they meant.

We’re also hearing this same impressive camera technology will arrive with the DROID ULTRA, and DROID MAXX for Verizon, and essentially all upcoming Motorola smartphones. The DROID ULTRA leaked this weekend, the Moto X has leaked countless times, so now we just need release dates, and an official unveiling by Motorola. Lets get this summer started Moto!