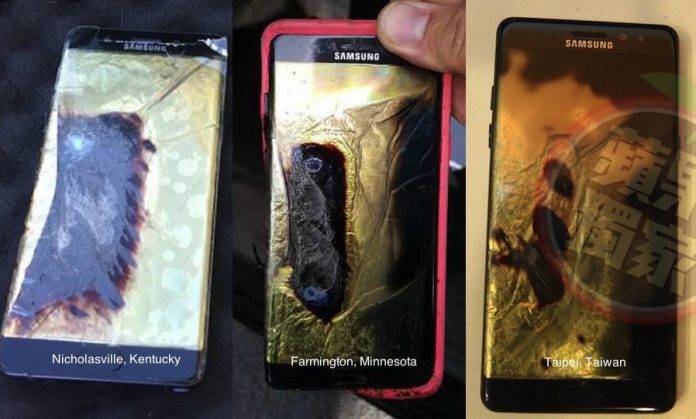 More reports of Note 7 batteries exploding are coming in. Three separate incidents have been reported–two in the United States and one in Taiwan. All these happened the same week a Note 7 caught fire before takeoff while inside a Southwest Airlines flight to Baltimore from Louisville. You’d think the worst is over for Samsung after announcing the recall a few weeks ago but apparently, more problems are being reported.

We’ve been saying that Samsung may still have problems after the recall which led us to think that a second recall might happen. Despite all these, the company’s numbers are still up thanks to other businesses keeping it afloat.

Over the weekend, reports of these new explosions came up. First report was from Nicholasville, Kentucky that involved a certain Michael Klering who claimed their bedroom was filled with smoke last Tuesday at about 4:00 AM. Klering and his wife woke up to a hissing sound and a smoke-filled room caused by his over-a-week-old replacement Note 7 on fire. The unit wasn’t charging.

Klering is said to have acute bronchitis due to the smoke inhaled. He started vomiting black later in the day. He has hospital records to show and an official Nicholasville Fire Department report was drafted. The victim still has his phone. He is claiming that Samsung wants his device for further investigation but doesn’t want to give it up. Samsung did pay for x-ray but then he said he received something that made him question Samsung’s honesty.

Klering said he received a text message that appears to be sent by mistake. The text read: Just now got this. I can try and slow him down if we think it will matter, or we just let him do what he keeps threatening to do and see if he does it. He said that was from a Samsung rep. That sounded really wrong and so now Klering wants legal assistance on the matter.

Meanwhile, in Farmington, Minnesota, a “melting” Note 7 was reported by a teenager. By melting, Abby Zuis meant a burning sensation and the phone cover melted by the phone itself. It was only a minor burn but flagged the new Samsung device a fire hazard. It was also a recalled Note 7 unit. To prove the report was legit, receipts of purchase and exchange were shown off. The Consumer Product Safety Commission is already looking into the case with its own investigation.

In Taipei, Taiwan, another similar explosion happened. Lai, 26, was said to be in a park walking her dog when her Note 7 exploded. It was also a replacement unit that started to smoke while inside her pocket. Samsung Taiwan still wants to confirm if it’s really a replacement model so it wants to do further investigation and clarification.

In the United States, Samsung sent out similar responses on both “explosions”:

“We want to reassure our customers that we take every report seriously and we are engaged with Mr. Klering to ensure we are doing everything we can for him. Customer safety remains our highest priority as we are investigating the matter.”

“We want to reassure our customers that we take every report seriously and we are engaged with the Zuis family to ensure we are doing everything we can for them and their daughter.”

Safety is a priority and in Taiwan, the Consumers’ Foundation urged Samsung to halt sales and the exchange program. They said continuing sales would be like “sending bombs to consumers” according Focus Taiwan.

Obviously, discontinuing sales is the quickest action for now but Samsung still needs to provide a more permanent and definite solution. At this point, it is difficult for the company to give one because they need to investigate more. We’re guessing we’ll be hearing far more worse cases but we’re keeping our fingers crossed that Samsung will finally get over this challenge. It’s one of the worst issues ever that no company will ever want to face. One recall is bad enough but to do a second one is just a big blow.

We hope to hear more official reports and good news instead of more similar incidents.

UPDATE: An earlier version of this article incorrectly placed Farmington, New Mexico when it should be Farmington, Minnesota.