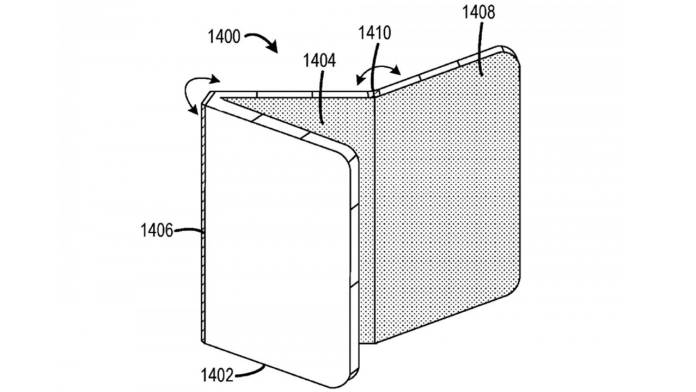 The foldable phone market isn’t saturated still, there is a lot of scope for improvement even though the likes of Galaxy Z Fold3 and Galaxy Z Flip3 have creased out most of the niggles in their own design segments. After the foldable phone market begins to get crowded, the next movement in the phone industry is headed toward smartphones that triple-fold. Yes, we have seen hints of the same from Samsung and TCL in the past and now Microsoft seems to be headed in the path.

Microsoft wants to be ahead in the foldable phone designs, whether it’s the regular folds that we are witnessing now, or the phones that will fold more than once. This despite how disappointing its Duo – tablet and phone hybrid – outings may have turned out for the company.

To this accord, Microsoft is believed to be working on the idea of a flexible smartphone with a tri-fold display. This has been revealed through the sketch from a patent that Microsoft has filed for a “multi-panel device”.

The patent granted by the United States Patent and Trademark Office (USPTO) shows a phone-like device with a tri-fold design featuring two hinges to hold three distinct panels that open up to form one massive display. When folded back, the device streamlines into a smartphone-like form factor.

Other than this, at this point in time, there isn’t much known about this Microsoft device. There are no details about the display size or the working of the hinge mechanism. Therefore, we will have to suffice our lust with only an image from the patent for now and wait anxiously to see what Microsoft plans to give out about the tri-folding phone in the near future.