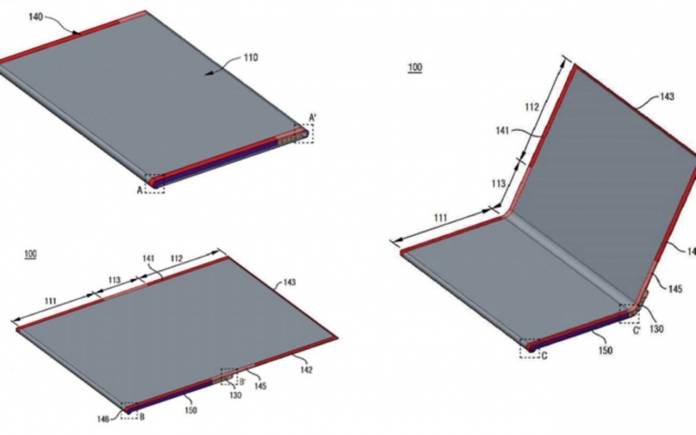 We’ve been doubting LG will roll out a foldable phone anytime soon but it’s always good to imagine how it may look like. LG could only be waiting for other foldable smartphones to go mainstream. Perhaps it’s working on something and is only waiting for the right timing. The foldable phone models we’ve seen like those from Samsung and Motorola are not really perfect yet. They are still priced at a premium. As for LG, it may develop something better–a rollable phone. A foldable phone idea is good but perhaps a bendable and rollable device is better.

The company is said to have filed for a patent that includes a hybrid form factor. The hybrid is for a foldable display that can also be rolled. The default look of the device is that of a regular, traditional smartphone. It can be folded and unfolded.

The device has an extendable side. The right part can be extended to become a tablet. Extend the display some more to use the device like a laptop. This device is only part of a patent file. We’re not sure if LG plans on turning this into reality but if executed and implemented properly, LG can have a new bestseller in gadget town.

The idea seems novel but it’s not impossible. In tech, the things we’ve never imagined would be made have been produced. It’s only a matter of waiting. A lot can happen in a few months or years but first, we hope to see a foldable smartphone that doesn’t have any issues.

If you’ve been waiting for a foldable phone from LG, just try the available phones that work with the LG Dual Screen. There’s the LG V60 ThinQ and the LG G8X ThinQ.