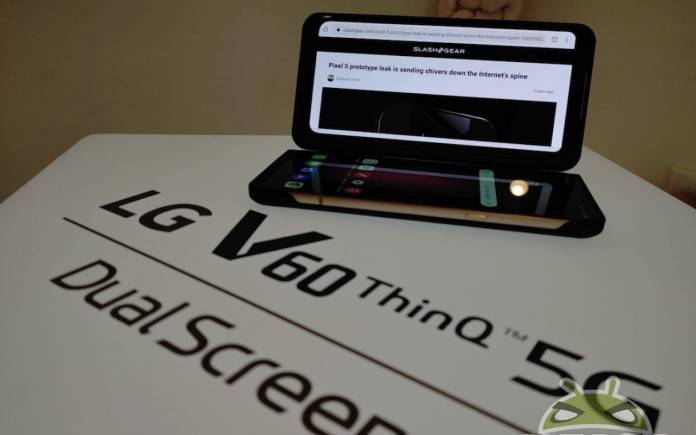 The LG V60 ThinQ is LG’s latest premium flagship smartphone offering. The company didn’t release an LG G device and launched an LG V instead. After months of leaks and rumors, the LG V60 was introduced over a month ago with a large display, 5000mAh battery, and a dual rear camera system. The device is sold on T-Mobile, Verizon, and AT&T. A teardown has revealed how easy it is to open and repair and just yesterday, more notable features have been detailed in a video.

As we described at launch, the LG V60 ThinQ works with the LG Dual Screen. Such support is expected ever since the system was introduced last year together with the LG G8X ThinQ.

Support for the Dual Screen attachment is available, as well as, support for Active Stylus pens. The LG V60 with a Dual Screen allows for a better mobile experience. You can do more with the system as it lets you multitask.

The Dual Screen also responds to Active Stylus pens. LG didn’t announce this detail but an XDA developer discovered the feature. Active pens act as a stylus to a mobile device. They are usually used with tablets like those from Wacom.

An active stylus used on the LG V60 ThinQ makes the latter more powerful than ever. This means you can draw and use the device for illustration. It somehow turns the LG V60 into something that could rival the Samsung Galaxy Note.

Both the phone and the dual-screen attachment work with active pens. That’s an added value to the smartphone that we hope could help LG pull up numbers. Such support may not be an official feature but kudos to LG for allowing it to happen. Maybe the next LG V model may offer this support officially. That would be very interesting.