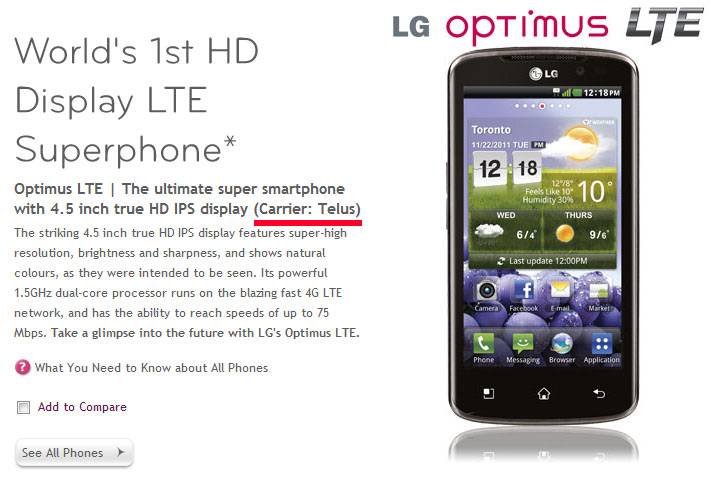 LG’s right proud of its international flagship, the Optimus LTE, and rightly so. The high-end smartphone has sold more than a million units worldwide, including Asian and North American markets. The company hopes to sell a few more in Canada soon, at the behest of wireless carrier Telus: the cellular provider recently showed up in a list of supported carriers on LG’s Canadian website. Telus has remained mum on the subject, probably because its LTE network isn’t scheduled to go live until later this month. Canadian competitor Bell as the Optimus 4G LTE.

By now you should be familiar with the Optimus LTE’s hardware but just in case you’re not: the biggest selling point is the combination of a 1280×720 4.5-inch IPS display and a high-speed LTE connection. Inside the phone you’ll find a dual-core 1.5Ghz processor and 1GB of RAM, with the obligatory 8MP camera thrown in for kicks. In both American versions of the phone that Android Community has reviewed thus far (the LG Nitro HD on AT&T and the Spectrum by LG on Verizon) it’s come with just 4GB of on-board storage and a free 16GB MicroSD card. Software is still limited to Gingerbread with LG’s custom skin.

The absence of the Optimus LTE on Telus’ site is odd, since they’ve already announced LTE versions of the Samsung Galaxy Note and Galaxy Tab 8.9 for the upcoming high-speed network. It could be that they simply haven’t finalized a marketing deck just yet, and LG let the cat out of the bag early on their own site. Whatever the reason, expect to see the Optimus LTE grace retail and online Telus stores within the next few weeks.