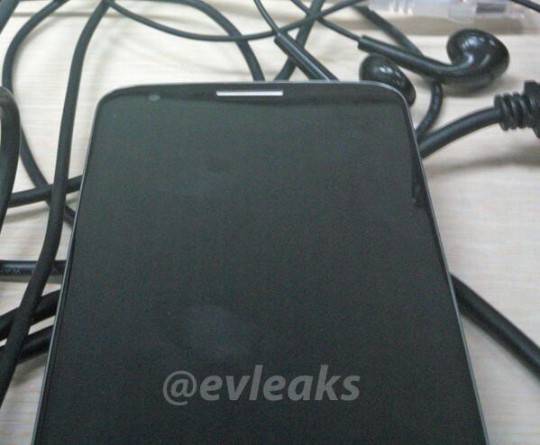 We’ve been hearing about the LG Optimus G2 flagship handset for awhile now, with the leaks slowly picking up speed as we narrow in on LG’s upcoming August 7th event, during which it is expected the smartphone will be unveiled. Both alleged images of the handset have surfaced, as well as specs, with another round appearing on the Greek site Techblog.gr.

As we’ve heard before, the bezel is said to be very small, which you can see in the image above, rumored to be of the upcoming handset. Likewise, word has it the LG Optimus G2 will run on a Qualcomm Snapdragon 800 processor alongside 2GB of RAM. All of this is consistent with past leaks, and includes word of a rumored 13-megapixel rear camera.

There’s said to be optical image stabilization with the camera, which probably means we’ll find a nice camera app to go along with it. Other information provided by the sources includes an IPS display size of 5.2-inches, making it a tad more svelte than the current generation of the handset. The resolution is said to be 423ppi at full HD 1920 x 1080p.

And then there’ the buttons on the phone, which are said to have been re-positioned over the current generation to the rear of the handset near the bottom. Word has it there are three total: the power button, volume rocker, and a +/- key that performs various functions like zooming. This is due to the narrow margins around the display, giving more room for screen real estate.

Back in March, a benchmark surfaced that is believed to possibly be of the Optimus G2 due to the handset – the LG D801 – being listed as “g2_tmo_us”, which also hints at a T-Mobile offering. That particular benchmark showed a Snapdragon 800, but had the display at 1794 x 1080. We’ll know for sure in a few weeks, so stay tuned!

Update: Another leak has surfaced over at RBMen indicating that the Optimus G2 will have 3GB of RAM instead of 2GB.