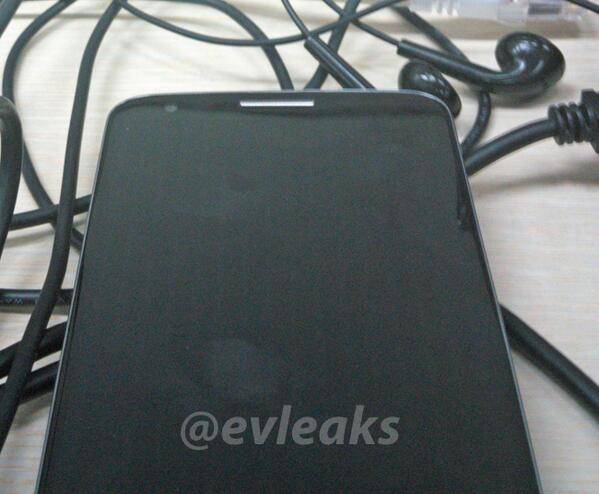 Last weekend we received our first glance at this mystery handset from the folks at LG, which many believe to be the LG Optimus G2, and today we’re getting another up close view at what could even be the next Nexus smartphone. The popular Twitter account @evleaks has once again delivered and posted another photo of this unannounced device, and we’re still left wondering what exactly LG has planned.

The smartphone was originally leaked last week in a full-body shot showing a super-thin bezel, no navigation buttons, and possibly being 5.5-inches. Which means just like the LG Nexus 4 and other Nexus devices it will be all on-screen navigation. This doesn’t mean it will be the Nexus 5 but it sure has a Nexus look with the rounded edges, speaker grill, and front facing camera all in a similar layout.

The image today gives us another glance at the handset, but still doesn’t reveal any details. You can see from all images that have been released that this has one of the thinnest bezels we’ve seen to date. That is an edge-to-edge display if we’ve ever seen one. Many believe, including @evleaks, that this is the LG Optimus G2, but we’ll have to wait and see.

Last years popular LG Optimus G ended up being the base for Google’s Nexus 4, and we could see the exact same thing this year too. While many don’t believe Google has a new smartphone they’ll unveil next week at Google I/O, you never know. We could be seeing an LG Nexus 5 with Android 4.3, or sometime this summer LG will simply announce the new LG Optimus G2 with a large 5.5-inch display, thin bezel and all.