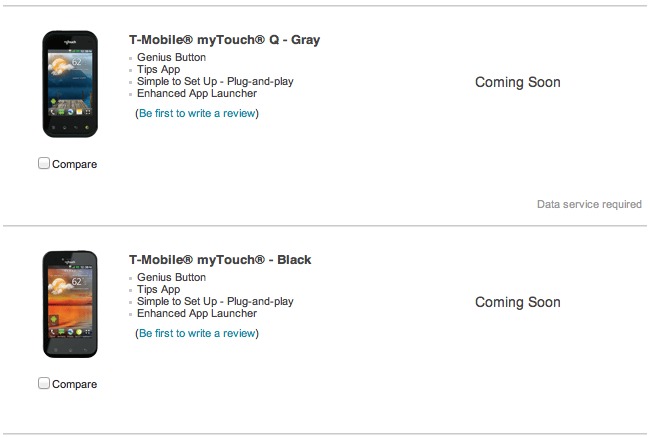 Earlier today we posted a timeline for T-Mobile’s upcoming Android releases, the LG myTouch and LG myTouch Q among them. Now it appears that the slate and slider are in the carrier’s retail system, and promotion for both models (not to mention some much-needed specifications) should be coming soon. Both devices are expected to debut on November 2nd.

The new MyTouch and myTouch Q look virtually identical, save for the latter’s slide-out keyboard and a few millimeters of girth. There’s precious little information available about them besides their appearance, but given the previous members of the myTouch family (all made by HTC), you can expect mid-range specifications and prices. The screens appear to be in the 3.5-3.8 inch range. Based on the rollout leak this morning, the myTouch and myTouch Q are not HSDPA+ 4G capable. Both should be priced at $129 of contract. The specific “Grey” and “Black” colors in the screenshot may indicate that more colors will be offered in the future.

The really interesting thing about the LG myTouch/myTouch by LG line is that it’s, well, by LG. Previously HTC had an exclusive on that particular branding. It’s possible that T-Mobile is looking to make its own sub-brand of phones, not unlike Verizon’s prolific DROID moniker, which has members from both HTC, Motorola and Samsung. T-Mobile currently does away with any LG branding on the LG G2x, despite its high profile.