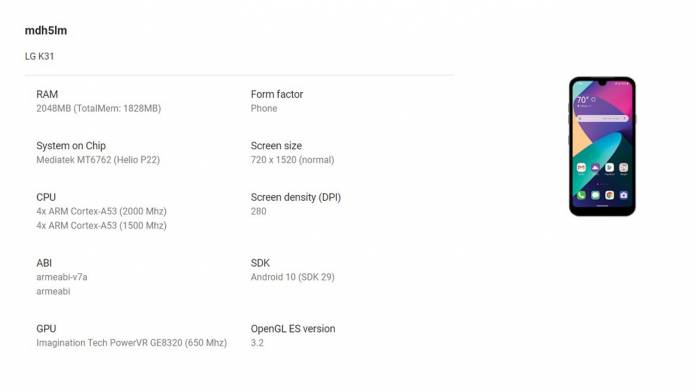 LG recently introduced LG Velvet with Velvet user interface and we know the company is mulling a rollable phone in the near future. Now, it seems, LG is also working on another mid-ranger, which we haven’t really heard anything about in the past. The upcoming phone called LG K31 was recently spotted on Google Play Console with key specs and a front picture of the phone. The listing suggests that a new LG phone is likely to be announced in the coming months with modest features and price tag.

The listing on Google Play Console was spotted by reliable tech tipster Mukul Sharma. The phone is leaked to run on Android 10 out of the box and feature a MediaTek Helio P22 octa-core processor under the hood. LG K31 could have HD+ display with 720×1520 pixel resolution and 280ppi density. The display size is not given out in the listing but we learn that it would come with 2GB of RAM.

The upcoming smartphone is expected to feature Imagination Tech PowerVR GE8320 (650MHz) GPU. From the image, we can make out that K31 will sport a waterdrop-style notch and will have a thickish bezel with a significant chin. From how it appears, the volume rocker can be seen on the left side of the display while the power button is featured on the right side.

Interestingly, another button can be seen placed under the volume buttons, which if widely guessed could be a dedicated Google Assistant trigger. We do not have any word on price or when the phone will be announced. Neither we have anything to give out about the optics – the back of the phone has not been pictured. If LG has the K31 in works for real, we are presuming to hear a lot more about the phone in the coming days.