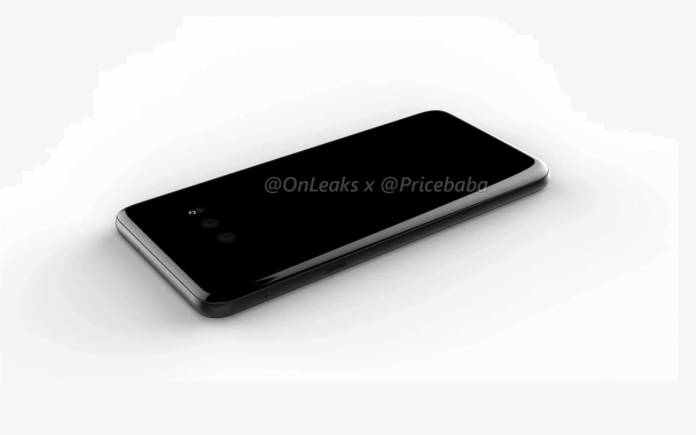 LG has been quiet for a time when it comes to mobile business but we know it’s staying. The other South Korean tech giant has been making changes in its business strategy and it includes changing the frequency of new product releases. At this point, the company needs to be smart lest it wants to lose more money. After the LG G8S ThinQ, LG is launching another LG G8 variant. Rumor has it the LG G8X will be unveiled next.

Image renders of the LG G8X have surfaced online. As usual, they were made in cooperation with OnLeaks. PriceBaba has shared the set of photos of what could be the new LG flagship that is expected to roll out at the IFA 2019 in Berlin.

Details are still scarce but the renders and 360-degree video give us a glimpse of what could be the LG G8X. The device obviously follows the LG G8 ThinQ and the LG G8S ThinQ. It also boasts a dual rear camera system in horizontal orientation, glass back panel, and flash and sensors. The phone also comes with a notch that holds the selfie shooter. It’s only a small waterdrop notch compared to the wide one of the older G8.

The screen is 6.2-inches which is large already but you can notice the very thin bezels on both sides. Dimensions are said to be 159.3 x 75.8 x 8.5mm. We don’t see any rear fingerprint scanner so we can assume an on-screen fingerprint sensor. Nothing is certain yet but there is a possibility the LG G8X will be the first from LG to have such kind of in-display security feature.

The LG G8X could run on the latest Qualcomm Snapdragon 855+ although we won’t be surprised if it will just be SD855 like the Galaxy Note 10. The usual buttons are also present: power button (right), volume rocker (left), Google Assist key (left), and a SIM card tray (top). At the bottom edge are the following: 3.5mm headphone jack, USB Type-C port, and a loudspeaker grille. Unlike the LG G8 ThinQ, there won’t be a Crystal Sound OLED speaker.