The Mobile World Congress 2017 is over. Thank you Barcelona for the warm welcome as usual. We’ll be back next year and we’ll see then how the mobile industry will progress. At this point, it still is unclear to us how the tech giants and OEMs will advance further. Some are saying this will be a better year for VRs and augmented reality will finally be integrated with more devices. For others, smartphones will be about getting more premium and powerful cameras. If we are to look at the Sony Xperia XZ Performance which was named as the “Best New Smartphone at MWC 2017“, we can surmise that imaging technology is definitely more important these days.

We have no doubts there are people looking for the best camera phone. Such has already replaced the role of compact cameras and DSLRs in their lives. Others have gone serious with mobile photography mainly because it is more convenient and produces almost the same results as when using professional cameras.

For this year, the Sony Xperia XZ Premium flagship boasts of a 4K HDR. It has a smarter camera with Motion Eye technology that lets users record videos at 960 frames per second (90fps). The Huawei P10 Plus impresses us with its imaging features. The main rear camera uses a dual camera system of a 12MP RGB and 20MP Monochrome Leica Summilux lens (with OIS and f/1.8) and an 8MP front-facing camera with Leica lens (f/1.9). Meanwhile, the LG G6 only has Dual 13MP rear camera and a 5MP selfie shooter. 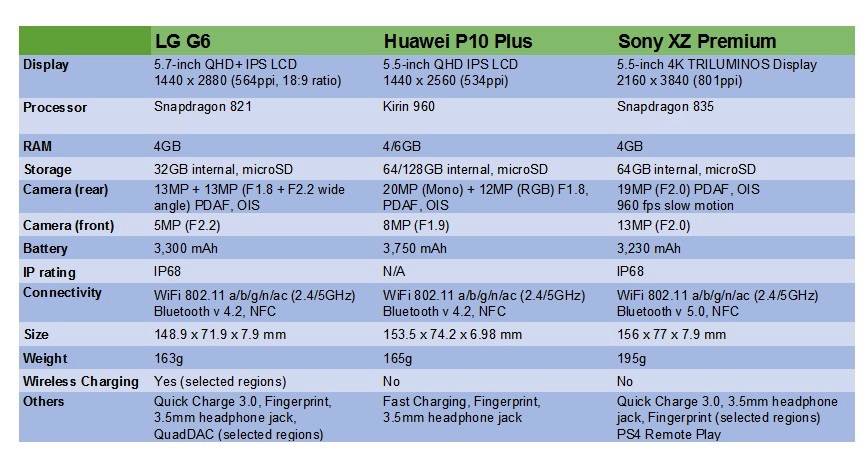 We’re comparing these three smartphones because they are the premium flagship phones from the top OEMs at the MWC. This year, LG didn’t have its closest rival Samsung as the Galaxy S8 launch has been delayed. Huawei is the number 1 Chinese OEM today while Sony captured our attention with the Xperia XZ Premium. It was quite unexpected that Sony will be a winner so it was indeed a pleasant surprise.

We have yet to share with you our comprehensive analyses and reviews of all three smartphones but for now, let’s check out their main features and specs.

Processor. A quick look at our table above tells us the Sony Xperia XZ Premium is more powerful. The use of Snapdragon 835 processor alone is proof. Huawei uses its own Kirin 960 chipset which was also used in last year’s Huawei Mate 9. We know it offers 180% better graphics performance, 18% improvement in CPU performance, and improved data transfer speed. LG only settled for the Snapdragon 821 which is actually ideal for the dual camera trend.

Display. The LG G6 has the biggest display at 5.7-inches. The other two both have 5.5-inch screens. Pixel resolution differs but the Sony Xperia XZ Premium has the largest at 2160 x 3840 (801ppi). It also boasts of a 4K TRILUMINOS Display while both the LG G6 and Huawei P10 Plus only have QHD+ IPS LCD.

RAM and Storage. Each one is powered by 4GB RAM. Onboard storage capacity has improved as 64GB is the standard although the LG G6 only comes with 32GB.

Cameras. All three rear cameras are impressive. Sony made use of a single camera while LG and Huawei took advantage of the dual camera system. We know Sony has an edge because of its expertise in camera sensors but Huawei’s is different. The Leica name is also popular and Leica lens are even used on the P10 Plus’ front-facing camera. The Sony Xperia XZ Premium is being marketed more for its imaging features so this is really a tough competition.

Battery Size. The Huawei P10 Plus has the biggest battery at 3750mAh. The LG G6 followed with 3300mAh while the Sony phone only has 3230mAh battery.

IP Rating. Both the LG G6 and Sony Xperia XZ Premium were given IP68 rating. We don’t know how tough the Huawei P10 Plus is but it should be able to last a long time with its durable build.

Connectivity. We don’t really care much about connectivity options as long as there is WiFi, LTE, NFC, and Bluetooth but we noticed the Sony phone already uses Bluetooth 5.0.

Power. Only LG is capable of wireless charging but all of them are ready with fast charging. LG and Sony feature Quick Charge 3.0 while Huawei uses its own Super Charge fast-charging technology. 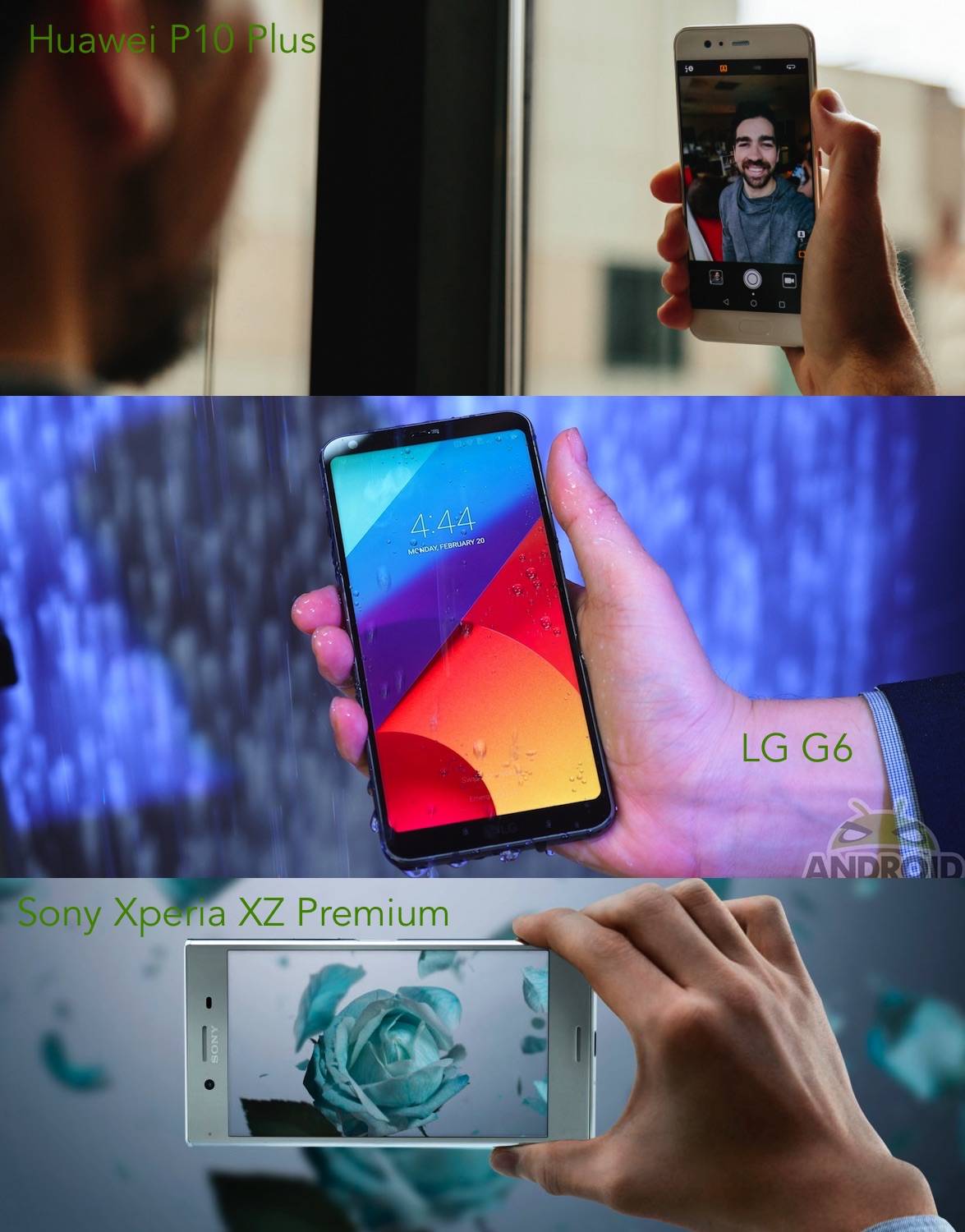