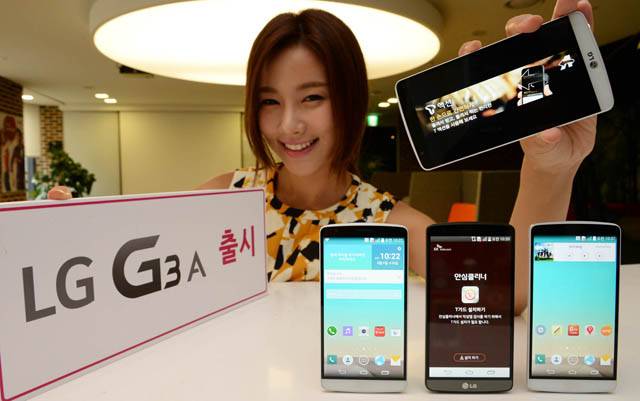 Now we’re getting to see how much LG really wants to capitalize on the success and popularity of its G3 flagship. After announcing the G3 Beat, or G3 S in Europe, last month, and after “accidentally” leaking the LG G3 Stylus yesterday, the company is now unveling the LG G3 A in Korea. If LG was poising the G3 Beat as an affordable mid-range, then this rather puzzling new arrival would be mid-high-range, if there ever was one.

The reason for that unusual categorization is that the LG G3 A sits cozily in between the LG G3 and the G3 Beat. It is basically smaller than the G3, weaker than the G3 but bigger than the G3 Beat and more capable than the G3 Beat. It’s 5.2-inch screen flaunts a Full HD resolution, meaning 1920×1080 pixels. The processor that drives this smartphone is a 2.26 GHz quad-core Qualcomm Snapdragon 800. It is joined by 2 GB of RAM and 32 GB of storage, still expandable with a microSD card. The cameras basically boast of the same features as the G3, meaning a 13 megapixel shooter at the back equipped with the new fangled Laser AF system and a 2.1 megapixel camera on the other side. To put these specs into perspective, the table below compares the three “G3” smartphones side by side.

That said, the G3 A does boast of some features that are new and, surprisingly, not even found on the premium G3. At least not yet. There’s this “T Action”, which is basically a wrist-based gesture action that can be set to, say, launch an app, answer a call, or silence the phone. If this gesture-based feature sounds a bit familiar, it’s because the Moto X introduced this gesture with “Quick Camera”, except LG is making it available for other actions as well. There is this new anti-theft feature that could be useful in cafe’s. Plug the G3 A to a wall socket, enable the feature, go to the bathroom, and when someone unplugs the the device, it will sound an alarm. Pretty nifty features that hopefully will make their way to LG’s other smartphones as well.

The LG G3 A is both an unexpected surprise and, at the same time, a rather decent alternative to a pricier G3. That is, if the G3 A is actually considerably cheaper. LG hasn’t yet announced pricing and launch date for the smartphone but it did reveal this: the G3 A will be heading for Korea’s SK Telecom. Whether that means it won’t be stepping outside of its hometown remains to be seen.