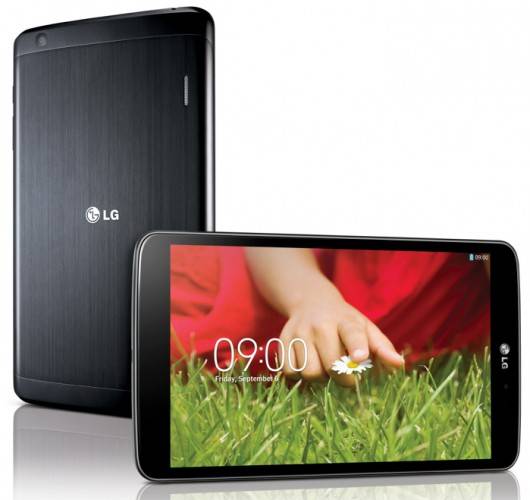 Early details of the LG G Pad 8.3 had been a mix of official and rumor. There had been some leaks and speculation and there was also some teasing coming direct from LG. And while the official unveiling was expected during IFA, LG has offered a surprise announcement ahead of the show. Simply put, LG has announced the G Pad 8.3 and has said the tablet will be available in “key markets” during the fourth quarter of the year.

They have yet to specify each and every market that will see the tablet, however it will be coming to those in North America, Europe and Asia. So far pricing has yet to be announced, but we suspect that will be made clear closer to the actual release. Or for that matter, we suspect some price related leaks will appear in the not to distant future. Anyway, that all aside, how about we get into the specs which include an 8.3-inch display at 1920 x 1200 (273 ppi) and a quad-core 1.7GHz Qualcomm Snapdragon 600 processor.

Otherwise, the tablet will also have 2GB of RAM, 16GB of internal storage space, a 4600 mAh battery and Android 4.2.2 Jelly Bean. The camera setup will include a 1.3 megapixel front-facing camera and 5 megapixel rear-facing camera. Remaining hardware points have the tablet arriving in both black and white and with measurements or 216.8 x 126.5 x 8.3mm and a weight of 338 grams.

As we have been seeing with LG smartphones lately, they are pushing the G Pad 8.3 tablet with some of the “premium” features of the G Series devices. In the case of the G Pad 8.3 that means goodies such as KnockON which turns the tablet on by tapping the display two times. Other goodies here include QSlide which allows the user to control up to three apps in one window and Slide Aside which deals with multitasking.

Slide Aside is described as allowing the user to slide currently open apps off to the side using a three-finger swipe gesture. Anyway, while the announcement has been made and the specs have been shared we expect this is not going to be the last we hear from LG on the G Pad 8.3. In fact, we suspect they will have the tablet on-display next week during IFA.