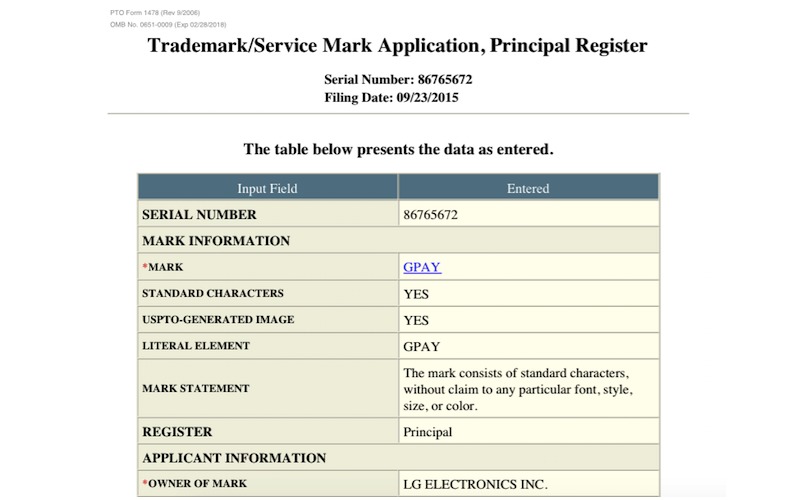 The other South Korean tech giant LG is set to join the mobile payment arena with a new service called ‘G Pay’. Sounds familiar? This G Pay from LG is expected to rival Apple Pay, Android Pay, and Samsung Pay. The latter is the most popular in its native country, reported to have been used on 1.5 million transactions in just one month since its official launch.

Samsung Pay is now also available in the United States together with Google Pay and Apple Pay. LG followed quickly by applying for a new trademark at the United States Patent and Trademark Office (USPTO) for ‘G Pay’. Trademarks were filed in South Korea at the Korean Intellectual Property Office and the US almost at the same time.

Well, it was only a trademark filing. We’re not sure yet if LG will really join the mobile payment market. The company has the habit of filing trademarks that we think it really has no plans of using. Remember last August when it filed several Edge-related trademarks probably to spite Samsung? This time though, LG also filed for the trademark in the US. That says a lot because it could mean LG has plans to join the mobile payment industry. LG is also believed to be in contact with some businesses related to finance.

When the LG V10 was launched a few weeks ago, LG Electronics’ MC Business Headquarters’ Product Planning Group Executive Director Kim Jong Hoon confirmed that LG has plans to get into the payment business.

LG phones may already take advantage of Android Pay but having its own ‘LG G Pay’ is more convenient and probably more secure. With fingerprint recognition being developed by LG, Google’s very own payment service will be available on an Android Marshamllow-powered LG device–as soon as required technologies and security measures are ready.

Samsung Pay uses “Magnetic Source Transmission” technology aside from NFC. Meanwhile, LG’s unconfirmed mobile payment solution might focus on the latest tech like NFC and other USIM-based payment technologies. Some people believe that such newer payment solution will have a “wider payment range”. This is in contrast to Samsung’s belief that NFC still has limited reach so it makes more sense if you take advantage of the same technology most credit card readers currently used in most stores.