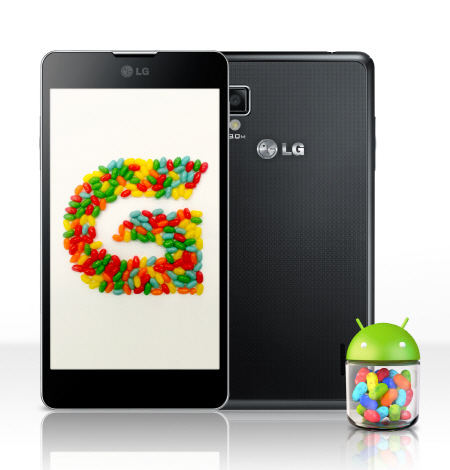 LG has issued a release regarding its plans for updating many of its devices to Jelly Bean. Owners of some of LG’s Optimus devices will get to enjoy the new features of Jelly Bean, some starting as soon as next month. Users with an LG Optimus LTE II will see their phones update sometime in November, with updates for other devices continuing as time goes on.

The Optimus G will be the next in line to receive a delicious Jelly Bean. It should see the update sometime in December. This should have owners of the device on the edge of their seats in anticipation.

The next phones to receive the update will be the LG Optimus Vu and Optimus Vu II. For these devices, the news is not quite as good, as LG announced that they will get a Jelly Bean update sometime in the first quarter of 2013. Hopefully, this ends up being early in Q1 and not all the way in March. After all, owners of an LG Optimus Vu or Optimus Vu II want those sweet Jelly Beans as much as the rest of us.

Oddly, LG made no mention of the LG Optimus 4X HD. This phone was a flagship device not long ago, and it was only released in August. Seems odd that LG would not update this phone with LG’s Q Slide feature. Besides Q Slide, these Jelly Bean updates will also include UI improvements, and app enhancements.