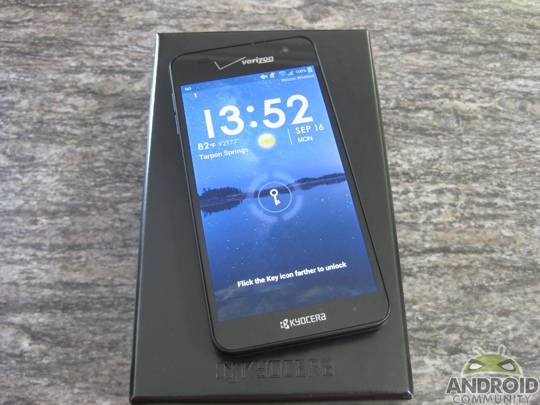 Kyocera has released more than a few waterproof phones over the past several months. In fact, we have taken a look at a few of them here at Android Community. There was the Kyocera Torque and Hydro Edge, both of which had decent specs, but appeared more of the focus was on the water-resistance. Well, we are now taking a look at the Kyocera Hydro Elite and as the ‘elite’ in the name would suggest, the specs are stepped up a bit. This one is still not what we would classify as high-end, but it should be a good option for anyone looking for a waterproof handset with Verizon Wireless. Read on to see how the handset stood up during our testing.

Up front you will find a 4.3-inch capacitive display with a resolution of 1280 x 720. Kyocera has also opted to protect the display and in this case, is touting it as being impact-resistant. The processor is a dual-core Qualcomm Snapdragon MSM8960 that clocks in at 1.5GHz. As you can see, certainly not high-end, but in comparison to other Kyocera Hydro branded handsets, we are seeing the display go from 800 x 480 to 720p and the processor going to the MSM8960, which is a Snapdragon S4 Plus. 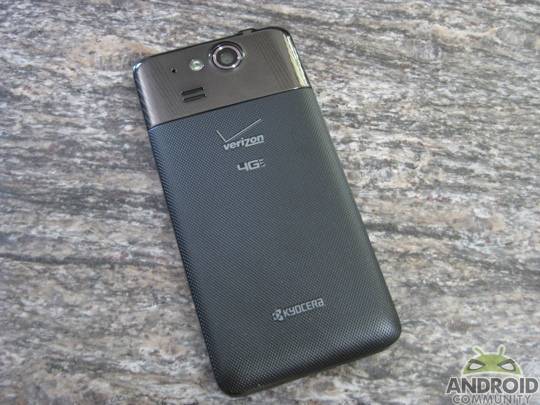 The handset itself, as you will likely see in the images, is a bit squared off. The corners are slightly rounded and the handset is comfortable to hold, however it does have a blocky sort of appearance. The Hydro Elite measures in at 4.82 x 2.38 x 0.43 inches and weighs in at 4.51 grams.

Kyocera also has the handset equipped with WiFi 802.11 a/b/g/n, GPS, NFC, Bluetooth 4.0 + LE/EDR and a 3.5mm headphone jack. The headphone jack sits on the top of the handset, along with the power button. Otherwise, the left side has the volume rocker and the microUSB for charging sits on the right hand side towards the top. There is also a small speaker on the back or the handset. Other details for the hardware include a 1.3 megapixel front-facing camera, 8 megapixel rear-facing camera and removable 2100 mAh battery — all three of which will be mentioned more in-depth further in the review.

The Hydro Elite also has the Smart Sonic Receiver technology that we have seen with other Kyocera handsets. While this is a feature designed to help improve the sound quality for voice calling — it is easily recognizable by the lack of earpiece. Kyocera notes how this means the technology “turns sounds into vibrations.” Basically, think bone-conducting. Perhaps key here, this feature helps improve voice quality in noisy (or windy) environments. Not to mention, it also means one less opening in terms of getting water on the inside.

The Hydro Elite has an IPX7 rating which means it can handle being in the water. Specifically, the handset should be able to withstand sprayed water, being out in the rain and also being submerged in water for up to 30 minutes (in up to 1 meter/3.28 feet of water). That all sounds good to us, but what it really means is less worry about getting caught in the rain. 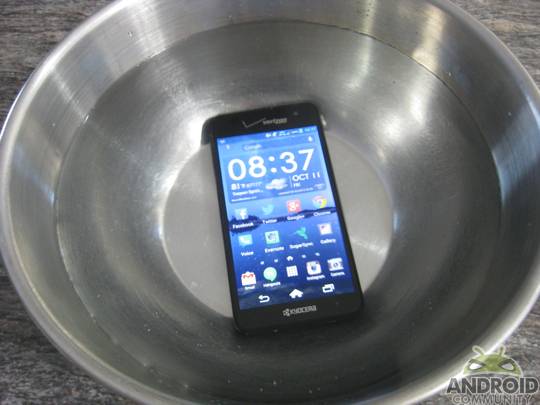 As this reviewer spends more than an average amount of time running outside in Florida — there is more than an average chance of being caught in the rain. Anyway, while we still make every effort to keep the phone from getting drenched in such a situation, it does mean quite a bit less in terms of worry.

Of course, in our testing we straight out dunked the phone (as you can see above). The end result, the handset stood up quite well. No issues from the water. That sounds good, but there are a few items to mention, first, you want to make sure the back battery cover is always firmly in place. There is a bit of a lip around the back cover (on the inside) to offer some additional protection, but it is still something to take note of.

The other issue is smaller and of less concern. It also goes with most touchscreen devices — they tend not to work so well with water. When in the water they are less than ideal and when wet or with wet fingers there may be some stutters. Otherwise, when dry the scrolling and touchscreen of the Hydro Elite is solid, just as one would expect and/or hope.

Kyocera and Verizon Wireless have the Hydro Elite shipping with Android 4.1.2 Jelly Bean. As we often find with Verizon Wireless, there are some carrier branded apps included. This time around users can expect the usual apps such as My Verizon Mobile, Verizon Tones, VZ Navigator and VZ Security. There are also some others included such as NFL Mobile and Viewdini, not to mention some Amazon apps including the Kindle app and MP3 app.

To clarify, a handful of these apps were added during our testing time.

What can we say here, pre-loaded apps that cannot be uninstalled are never fully welcomed. In this time at least they seem to be mostly welcomed apps. And on the positive side, they do take up little space in terms of used storage. Basically, if you want to truly ditch pre-loaded apps, you may want to be looking towards a Nexus device.

Of course, you can also expect the good apps — the Google ones, including access to the Play Store. That means you will have Gmail and the other goodies as well as the ability to download countless other apps that you actually need and/or want. Aside from talk of apps, Kyocera has also added the now-familar lock screen which allows quick access to a few options. 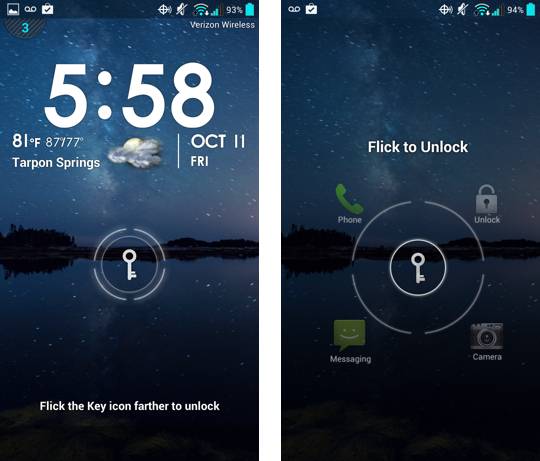 They have this called “Flip to Unlock” and it allows the user to quickly unlock to the homescreen or to the camera, messaging or phone depending on the direction of your flick. Perhaps more important, the handset seems to be able to provide a smooth and solid user experience.

There seems to be quite a bit of controversy in terms of benchmarks lately. We aren’t going to get into that side of the story here, but we will say that the Hydro Elite returned benchmark numbers that are consistent with what we expected. Or in other words, the Hydro Elite is not the most powerful handset on the market today. That said, despite not being a high-end device in terms of specs, we do stand by what we have been saying in this review — the Hydro Elite offers more than acceptable performance based on our use.

With that having been said, our use included some phone calls and plenty of text messaging and Hangouts. There was also some video streaming using Hulu Plus and Netflix and some audio streaming using Audible, Slacker and Doggcatcher. And what would a mobile phone be without web surfing. For that we used Chrome. Similar to what we said about some of the other Kyocera handset we have reviewed recently, the Hydro Elite is a good option for the average user looking for a good middle ground between price, performance and features.

Finally, for those concerned with the numbers, there gallery below contains those benchmarks. In this case we have some from AnTuTu, Quadrant and Geekbench.

Kyocera has the Hydro Elite equipped with a 2100 mAh battery. For those curious, one that is removable. They promise up to 13 hours of talk time and up to 9.84 days on standby. With that in mind, based on average use we didn’t have much trouble getting through the day. 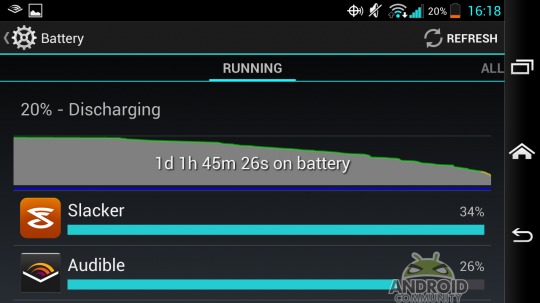 But as we often see, that depends on what you may be doing during the day. If you tend to stick with the basics, there should not be any issue or cause for concern. On the flip side, those planning to do lots of video (and to a less degree, audio) streaming may want to keep a spare battery or charging cable handy.

In comparison to some of the other Kyocera handsets, the Torque had a 2500 mAh battery and the Hydro EDGE had a 1600 mAh battery. Basically, the Hydro Elite provides a nice middle ground between the two. Another feature of the Hydro Elite is wireless charging. The handset is Qi-enabled, though users looking to take advantage would need to purchase an optional charging pad. 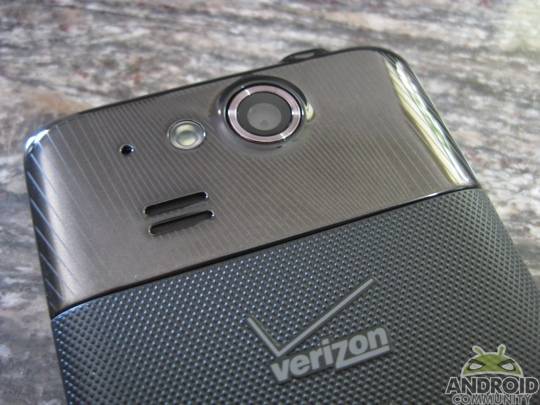 Kyocera has the Hydro Elite equipped with a 1.3 megapixel front-facing camera and an 8 megapixel rear-facing camera. The rear-facing camera has an LED flash, auto-focus and digital zoom as well as some other features such as panoramic, HDR, multi-shot and smile shutter. The camera can also record video at 1080p HD. An short video sample can be seen sitting below.

As for the images, they are decent, but certainly not the best we have seen from a mobile device. Basically, these will be good for web and email sharing and to some extent — good for printing out to put on display in the house (or sent to that family member that refuses to use email).

The camera seemed to perform better outside and with good light. The struggling came in when indoors and in low light situations as well as when trying to capture images close up (in detail). To get a better idea, we have included two image galleries below. The first six images are outside and the second six images are inside. 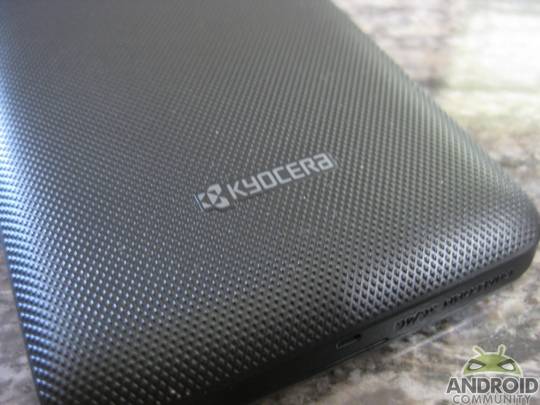 While the Kyocera Hydro Elite may not necessarily live up to the ‘elite’ in the name, Verizon users should take note that this Hydro branded handset is a step up from other models. Overall the handset does perform well, it feels solid in your hand and it does have the waterproof feature going for it. Not to mention, the handset has a price that is hard to argue with — free.

The Hydro Elite is currently available with Verizon Wireless and free for those willing to sign a two-year agreement. Alternatively, those looking to avoid the lengthy commitment can opt to go full retail at $349.99 or use Verizon Edge which has a monthly price of $14.65 with no money down.

Along with the perk of being waterproof, this could also be a good option for those who actually use the phone feature and are often in noisy locations. Simply put, depending on the person, or the specific needs of that person, the Hydro Elite could make a solid handset.