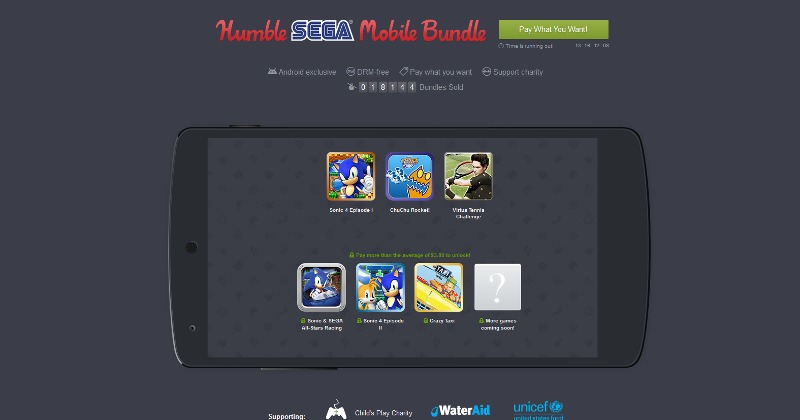 Barely a week has passed since Humble Bundle‘s last Android campaign and here they are again, this time with a more thematic twist. Pay what you want or beat the average to get your hands on some of SEGA‘s Android pieces, which practically equates to a lot of blue hedgehogs rolling around.

With a minimum cash “donation”, you will be able to download three SEGA games. Sonic 4 Episode I probably needs no introduction and is what you presume it would be: Sonic the hedgehog running around, collecting points, avoiding obstacles and fighting badies. All from your Android device of course. ChuChu Rocket’s name, on the other hand, is a bit misleading. OK, there’s a rocket involved, but nowhere in the name does it clue you in that it would be a literal cat and mouse, or mice, game. Virtua Tennis Challenge brings you back to the real world, somewhat, by giving you a chance to earn the title of a tennis pro without even lifting a racket. But hey, playing a game on smartphone is hard work too!

But wait, there’s always more! Beat the average and you get, of course, more Sonic. Sonic 4 Episode II, as you might have guessed, lets you continue your running adventures from Episode I. Sonic & SEGA All-Stars Racing gives your, really Sonic’s, feet a rest by jumping on cars and racing with friends. Yes, four player races right in the palm of your hands, so to speak. And the All-Stars part means you don’t have to stick with Sonic if you prefer some other SEGA figure to be your champion. Crazy Taxi is as crazy as it sounds, letting you take the driver’s seat in a make believe world where reckless driving gets you more points.

As always, the average to beat rises daily, so better put in your payment while it’s still at a low $3.80. Beating the average also unlocks future games that may be added later, usually halfway through the bundle campaign, which ends on September 3. These games are offered DRM-free so you can actually download them, using the fresh new Humble Bundle Android app, of course, and pass them around if you wish.