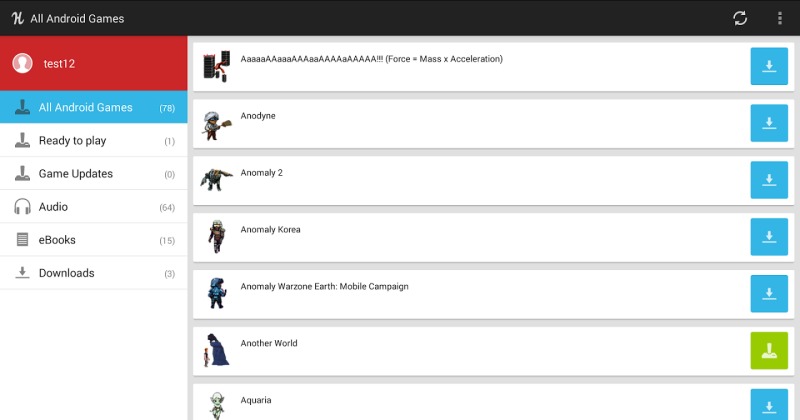 With all the Humble Mobile Bundle campaigns past, present, and future, you’d think that the Humble Bundle Android app would be in better shape. Though that was not exactly the case, the latest update to the app pretty much pulls Humble Bundle’s Android presence forward to the current decade, shedding off the Beta moniker and falling in line with other Android apps.

The Humble Bundle app now adheres to conventional Android design and looks prettier to boot. Colors have been splashed around giving the app some semblance of life. The side navigation panel, which now houses a few more items that we’ll get to later, now appears and disappears with grace. There is even a cute placeholder at the top of that panel that tries to mimic account info boxes like you’d see in the Google Play Store app, for example. It doesn’t have anything there yet, but it looks like a start. Unfortunately, the app’s migration to Android standards still isn’t complete, like many Android apps for that matter. While Google’s own apps have mostly eschewed expanded menus (the three vertical dots on the app’s action bar) in favor of placing everything in the navigation panel, Humble Bundle still gives users 2 places to look through when trying to wade through the app’s various options.

The changes to the Humble Bundle app isn’t just skin deep, however. For some time now, Humble Bundle has been offering things other than games, like soundtracks to go with those games as well as books, particularly comic books. Now Humble Bundlers, if that’s a term, can now download those too from one convenient app. That said, while the update promises improvements and bug fixes, downloading games and other items still seems to be a hit or miss situation, with some downloads just giving up without explanation nor indication.

The app does come with a few conveniences when it comes to those downloads. Once a download is done, tapping on the little green box will launch the appropriate app for the job. For comics, depending on the format you chose to download, it will open up the associated reader or the Complete Action Using window if there are multiple choices available. For music, since they come in ZIP files, they are automatically extracted and copied to your configured Music folder. After that, every time you tap on the green box, you will be taken to your music app to play those tunes.