When you get shaken down by Microsoft’s legal team, you know you’ve made it in the Android smartphone world. Chinese manufacturer Huawei has been honored with the IF Design Award for its forthcoming Vision handset, beating out considerable competition, Just a few days before helping to launch T-Mobile’s de-branded Springboard tablet, Huawei has detailed plans for expanding its presence in the UK with both the Vision smartphone and the Mediapad Honeycomb tablet.

The Vision (not to be confused with HTC’s Vision) is an interesting mid-range device, mostly on the merits of its curved glass screen. The 3.7-inch panel uses some unique manufacturing processes that Huwei claims “up to 17 hours to craft”, using some of the same techniques used to manufacture Swiss watches. The Vision isn’t a world-beater, but its unibody aluminum chassis, 1Ghz processor and 720p camera make it worth a look for those who are considering a similar phone from Samsung or HTC.

The Mediapad is one of only a few 7-inch Honeycomb tablets on the market, earning itself distinction with an all-metal housing and a 720p screen. The Android 3.2 tablet is showing up in the States as T-Mobile’s Springboard, which we reviewed earlier this week. The Springboard’s hardware is great, but the software lags behind, mostly on the additions made by T-Mobile – it’ll be interesting to see how a WiFi-only version fares. 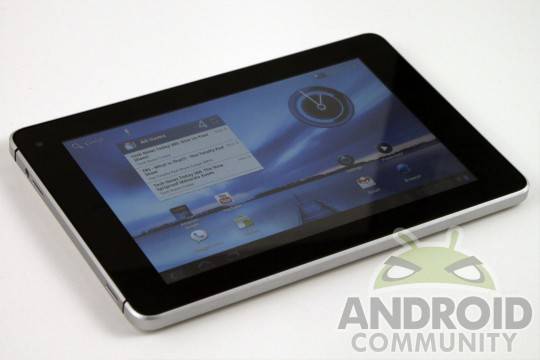 UK citizens won’t have long to wait: the company is planning to bring both the Vision and the Mediapad to market soon. The smartphone lands before Christmas for around £25 on-contract, and the tablet is currently slated for a spring 2012 release at £275 ($440). Aside from the lack of an HSPA+ radio, the Mediapad will keep the Springboard’s impressive specs: a 1.2Ghz dual-core processor, Honeycomb 3.2 and 16GB of on-bard memory, plus a MicroSD card slot.