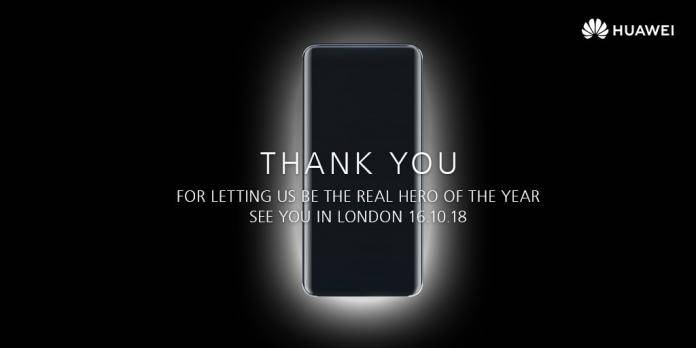 Huawei has been promoting the Mate 20 and Mate 20 Pro with ‘higher intelligence’ and we’ll get to know what it’s about on the 16th of October. That’s a week after the October 9 launch by Google and two weeks after the new LG V40 ThinQ is announced. Huawei may be the last to make an announcement among the top OEMs next month but we believe it won’t be the last if we’re talking about premium phones. The company has already proven its might with the Huawei P20 and P20 Pro so can expect the same with the new Mate 20 series.

The top Chinese OEM may not have a market in the United States but it managed to beat Apple and become the second biggest phone maker in the world today after Samsung. It doesn’t really need the US so all those hurdles don’t matter.

A couple of teasers has just been posted by Huawei. For one, it mentioned being the “real hero of the year” in reference to the new iPhone models from Apple.

Huawei is also grateful to the company (read: Apple) for “keeping things the same” and teases the next-gen phone will go “beyond consistency, beyond horizon, and beyond intelligence”. It means the Huawei phones will be better according to, well, Huawei itself.

Apple has recently announced the iPhone XS, iPhone XS Max, and iPhone XR it could be the reason why Huawei launched such a teaser. You know how the Chinese brand is capable of trolling its competitors like Apple and Samsung like it did after the Galaxy Note 9 event. It’s not afraid of any hype and is always willing to take a shot ay any of this rivals.

Thank you for keeping things the same. See you in London. 16.10.18 #HigherIntelligence #HUAWEIMate20 pic.twitter.com/ZhZHj9Xg3s