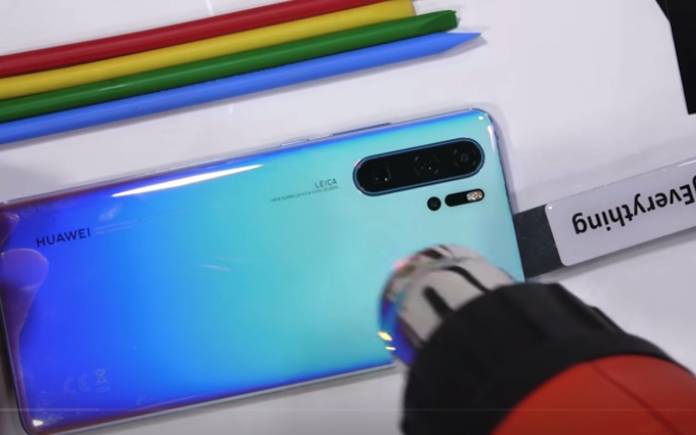 The present King of Mobile according to DxOMark, Huawei P30 Pro, is once again in the spotlight as Zack Nelson (JerryRigEverything) tears down the device. He did the teardown treatment as soon after he’s done with the Durability Test where he noticed the phone has got lots of adhesive. Another teardown analysis done by IFixt revealed the same last week. The phone is heavily glued but it still is very durable. Huawei’s latest premium flagship phone offering is relatively new but many fans have already expressed positive reviews.

The Huawei P30 Pro isn’t perfect but its main selling point is the quad camera setup. It can be considered as a periscope style camera because of the impressive zoom lens.

Huawei is doing an OPPO move with the 5x optical zoom lens. Oppo has introduced 10x but the P30 Pro is just as powerful because of the software being used by the OEM. Huawei has combined the powers of hardware and software here as any device maker should.

Inside the Huawei P30 Pro is a camera module with three segments. There’s the main sensor that collects light, a stack of lenses, and an angled mirror reflecting more light as described.

Watch the full teardown video below:

Opening the Huawei P30 Pro is a bit difficult but not impossible. Add some heat on to the sides and with the use of some metal, the rear panel comes off. Be careful though because you don’t want to destroy the ribbons and cables.

You can rely on the water and dust-proofing but it also means the phone isn’t easily repairable. We’ve mentioned that before as revealed by IFixit. The first teardown we watched done by a Huawei repair guy seemed easy but that was expected.

See the multiple cameras? Those are too many “eyes” watching your every move. And yes, they are what make the Huawei P30 Pro sell.