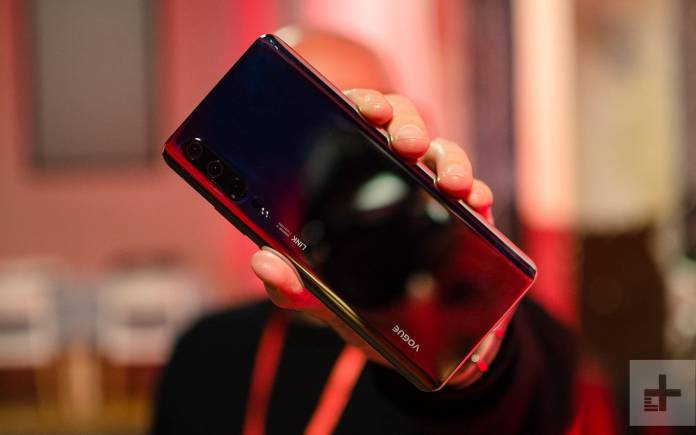 The Huawei P30 Pro is set to be unveiled next month. It will arrive together with the Huawei P30. As usual, it will be an upgrade with an additional camera. From the triple rear camera setup, the P30 Pro will have four. It is expected to beat the Galaxy S10 and S10+ and we’re assuming, will once again get the top spot on DxOMark. That’s not impossible. The phone is ready and it’s rumored to have been spotted in Barcelona at the Mobile World Congress. What’s the new flagship doing there? Well, perhaps just being teased.

Huawei will make the public launch on March 26 in Paris, France. The images below are hands-on photos and they appear to be real. Digital Trends managed to get a hold of the device that is said to be a non-operational prototype only. It’s close enough to the final model.

The Huawei P30 Pro looks similar to the Huawei P20 Pro but with some changes especially in the camera department. The prototype shows Vogue and Link branding (replacing Huawei and Leica) but we’re assuming the commercial version will have the actual logos.

The phone design confirms the P30 Pro phone cases we’ve seen before, showing the four rear cameras placed on the left rear position. All camera lenses are placed in one unit instead of separate bumps.

The P30 Pro prototype shows a reflective chrome finish. We expected a lot of fingerprints but Huawei could still make the necessary changes, after all, this is only a prototype. Around the edge, you will see the sleep/wake key and volume control, USB Type-C (bottom, and the SIM card tray on top.