Another series of images have surfaced for the yet to be announced Huawei Ascend P2 smartphone. This latest round of images are offering a look at the handset from a few angles, and join the previous leaks which have included everything from renders, to in-the-wild style to one that tipped the handset as being water-resistant. As for today, the images are showing the camera and the capacitive buttons as well as the power button and volume rocker.

Nothing all that surprising here, the power button and volume rocker are on the right hand side of the phone. The top is sporting the 3.5mm headphone jack and the capacitive buttons include Menu, Home and Back. There is also a look at the backside which shows the 13.0 megapixel camera with what appears to be a dual-LED flash. Of course, the obvious is there in the color — the handset is shown in both black and white.

Previous leaks have said the Ascend P2 will arrive sporting an IP54 certification which means it will be dust- and water-resistant. Specs are looking to include a 4.7-inch 1080p display, quad-core 1.8GHz processor, 2GB of RAM, 8/16GB of internal storage space, a 3000 mAh battery and Jelly Bean. We haven’t seen much in terms of additional storage, however with a cap of 16GB internal, a memory card slot would be nice to see. 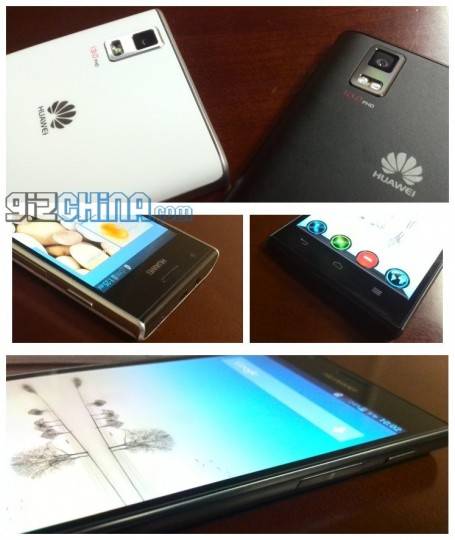 As of now we are expecting Huawei to make an official announcement during Mobile World Congress which is set to kick off in Barcelona fairly soon. Also, while these leaks haven’t been as widespread, we have also seen some previous chatter about an Ascend P2 Mini. This one was said to have a 4.0-inch display along with the same exterior looks.