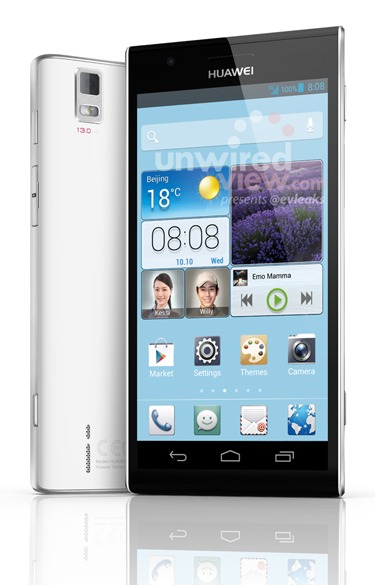 Just like the weeks before CES, we’re now getting close to Mobile World Congress in Barcelona, Spain, and we’re already starting to see leaks. Huawei is at it again and today the first press image has leaked for their upcoming 1080p super-slim smartphone. Their Ascend D2 was shown off at CES, but MWC it’ll be all about the new Ascend P2 with its 13 megapixel camera and 1.8 GHz quad-core processor.

Now as you can see above the Huawei Ascend P2 looks mightily impressive. They’ve moved to stock Android on-screen navigation buttons, although we aren’t sure what version of Android we’re looking at. Most likely 4.1.2 Jelly Bean. The problem here is we now have conflicting reports on the screen size. The leak today states a 4.5-inch 1080p full HD display – which would be impressive – but previous reports mentioned 5-inches and 720p.

Screen size aside the P2 will be one of the thinnest smartphones shown off at MWC, and that isn’t the only thing it has going for it either. Huawei’s fit some top-tier specs throughout this plastic unibody designed smartphone. If rumors are correct the Ascend P2 comes with a 1.8 GHz quad-core processor and 2GB of RAM, 8/16GB of storage, a massive 13 megapixel camera while remaining thin, and then happily a 3,000 mAh battery.

The leak and conflicting screen size comes to us today from the folks at UnwiredView and @evleaks, but we have a feeling more details and pictures will surface before Mobile World Congress kicks off later next month. Huawei keeps improving with each release and we’re getting excited to see what else they have in store for 2013.