Details of the yet-to-be-announced Huawei Ascend D2 smartphone have been leaking out slowly. Up until this point, we have seen some specs along with a bit from GLBenchmark and even a leaked render. And well, as of today things get a bit more exciting — some live-style images have leaked by way of the Chinese language ithome.com website.

This image leak contains four images in total and while they are clear and offering a good look, they do not contain a full shot of the handset. The images, as you will see below include a shot of the bottom front, the top back and two of the top front. Nonetheless, despite not having the full shot as many would have preferred, we are able to see what appears to be a nice device. 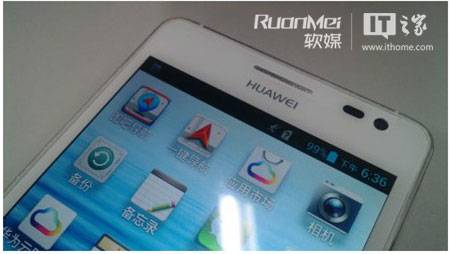 In fact, the Ascend D2 is believed to be the flagship device from Huawei. The specs for the Ascend D2 include Android 4.1 Jelly Bean along with a 5-inch (1920 x 1080) HD display, quad-core 1.5GHz processor, 2GB of RAM, 3000 mAh battery, 1.3 megapixel front-facing camera and a 13 megapixel rear-facing camera.

Otherwise, along with the images and specs, there was also talk of price. The Ascend D2 is expected to arrived priced at 3,299 yuan (about $530 or €399). All that said, it seems the only item we still need to see is the official announcement, which Huawei is expected to do during CES. And rest assured in knowing that Android Community will be on-hand to bring you all the details coming out of Las Vegas.