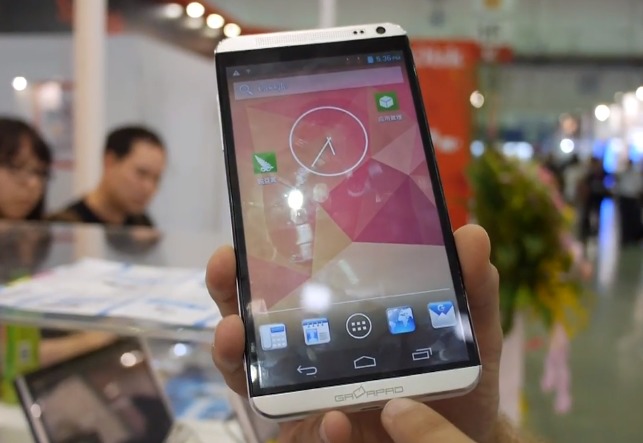 Today, we are getting a glance at what we could expect to see with the new HTC T6 phablet that’s been in the news as of late. Thanks to a pretty well made knock off device spotted on video at Computex, we’re seeing the impressive HTC One design on a massive 6.3-inch device. Rumors have HTC’s new device coming in at 5.9-inches, but this is pretty close so take a peek below.

HTC has a new smartphone tablet hybrid in the works that they hope will directly compete with the upcoming Samsung Galaxy Note III, LG’s Optimus G Pro and its 5.5-inch display, and even the recently announced ASUS FonePad 6. The device is being called the HTC T6 for now (The One was M7) and the full details still aren’t known.

However, while we wait for the HTC T6 to leak in the flesh and give us an idea of what to expect, some Chinese manufacturers have already produced a pretty stellar looking device in their honor. Bringing the unique design hues and front facing speakers (although they might not work on this knockoff) all to a massive 6.3-inch device. After checking out some YouTube closed captioning we have some of the details on this device too.

The device in the video above is apparently called the Galaxy GalaTab 6.3, which makes zero sense given it doesn’t look anything like a Samsung Galaxy device. It rocks a 6.3-inch 1080p display, quad-core processor, 8GB internal storage, and is running Android 4.2.2 from what we understand. It’s a pretty good looking device right? Even though it isn’t the final design.

For now we have no idea what exactly we can expect from HTC, but if the recently leaked HTC One Mini is any indication, we could get the exact same design in a much bigger package with the T6. Similar to what we’re showing here today. Rumors have HTC’s phablet launching later this summer, so we should know more soon enough.

Would you rock this phone for your daily device? Or is that just too big?

— Thanks for the tip Faris!