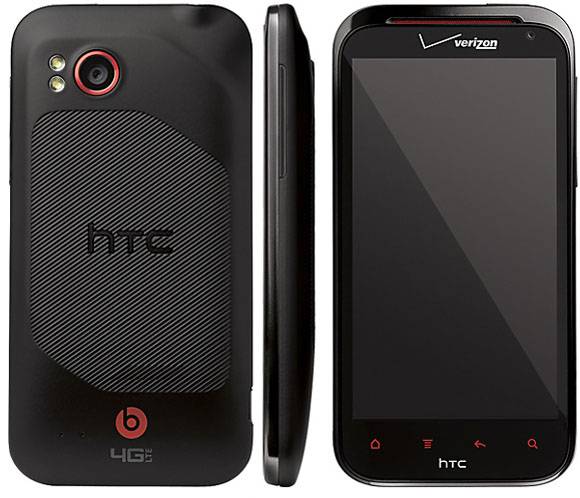 At an HTC event in New York City today, the manufacturer announced its latest and greatest Verizon 4G LTE phone, the HTC Rezound. The phone has been leaked to blazes and back, but it’s good to finally get confirmation on this piece of high-end hardware. The 1.5Ghz dual-core Gingerbread smartphone is HTC’s first with a 720p display, stretching 1280 x 720 pixels across a 4.3-inch screen. The Rezound was previously codenamed the Vigor.

On the inside you get 16GB of built-in storage plus a 16GB MicroSD card and HTC’s latest version of Sense 3.5 running on top of Android Gingerbread. Sadly the Rezound won’t run Ice Cream Sandwich at launch, but HTC says the phone is “ICS ready”, and they’re planning an update for early next year. 1GB of RAM should give the software plenty of room to breathe. Sense gets you 5GB of free Dropbox storage automatically.

The HTC Rezound is the first US phone to take advantage of HTC’s Beats acquisition, and will include hardware and software to take advantage of the high-profile audio company. The stylized “B” logo adorns the back in red, to match the red capacitive buttons below the screen, the red speaker grille and the camera ring. A free pair of Beats headphones with an in-line music remote is included. HTC is opening the Beats API to developers, so look for third-party audio apps to take advantage of the hardware soon. HTC said that “music will be the heart and soul” of the phone.

As far as media goes, the Rezound features the superphone standard 8 megapixel / 1080p rear camera, with a nicely detailed 2 megapixel front camera. The battery is a rather pedestrian 1620 mAh. That’s a little on the small side for an LTE battery, especially for a phone this large. Verizon did not mention an estimated battery life, but there is an FCC filing for a wireless charging battery cover.

Special attention has been paid to the camera, which now features an instant shutter, panorama assist and an action burst, complimenting an f2.2 lens. The 1080p video camera will have integrated effects and slow-motion capture.

Stylistically, the HTC Rezound seems to be a combination of the DROID Incredible and the ThunderBolt. It’s got the dramatic red-on-black color scheme of the former, made all the more impressive by the red-tinted buttons and battery bay, but the screen size and LTE connection (not to mention bulk) of the latter. It’s definitely a fierce looking phone, but I definitely prefer the construction and kickstand of the original ThunderBolt.

The HTC Rezound will be available starting on November 14th, for $299.99 on-contract.