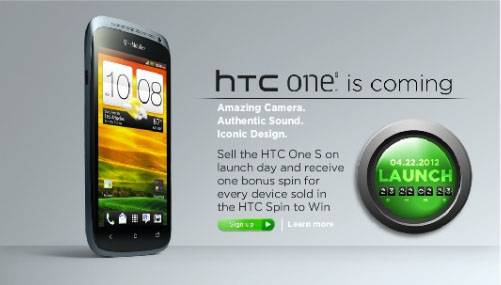 Fair warning, T-Mobile customers: treat this one as rumor, because that’s what it is. Now that that’s out of the way, TmoNews has gotten a tip that HTC’s One S will be headed to the American carrier on April 22nd. That conclusion comes from what looks like a pre-release web element, showing off the brand-new phone with an unmistakable “countdown” timer ending on the Monday in question. The phrase “sell the HTC One S on launch day” probably means that this picture was taken from an internal T-Mobile intranet, meant for retail employees or associates.

When it launches on T-Mobile (on a date that still hasn’t been verified) the One S will be one of the most powerful phones on the network, to say nothing of its style. A 4.3-inch qHD AMOLED display shows off Ice Cream Sandwich and Sense 4.0, HTC’s Android 4.0 version of its custom user interface. The phone features a 1.5Ghz dual-core Snapdragon processor, 1GB of RAM, 16GB of internal memory and an 8MP camera with HTC’s much-lauded F/2.0 lens. All this is in a phone just 7.9 millimeters thin, with an anodized aluminum body that’s easily one of the prettiest HTC’s ever made.

April 22nd seems like a safe enough bet – HTC’s One series will be available as soon as April 2nd overseas, and T-Mobile could use a new flagship phone at the moment. The Galaxy S Blaze 4G is nice, but basically an upgrade to the original phone, not a replacement. There’s still no word on price, but considering the fact that AT&T’s HTC One X will almost certainly be $299 when it’s introduced, I’d bet on $199 or $249 for the One S. If the launch date is accurate, we should start seeing more leaks and an official announcement within the next week or two.