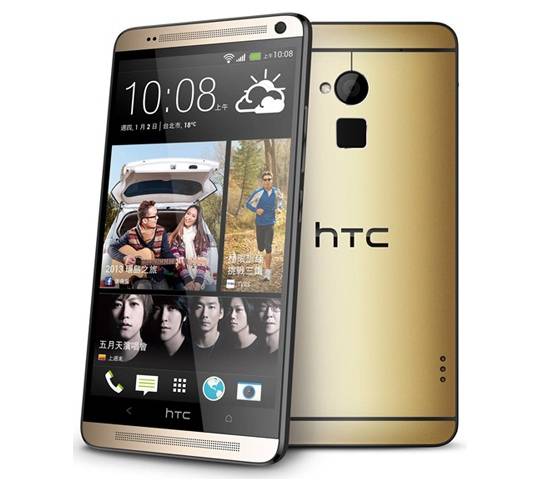 HTC unveiled the “golden” edition of the One back in November and it looks like the larger sized One max has gotten a similar color treatment. The handset is coming available for those in Taiwan, and officially speaking, is Amber Gold in color. HTC has the Amber Gold One max available with 16GB of storage, and otherwise, the hardware specs are the same as the original model.

For now it looks like this release is limited to Taiwan. Though, while limited to Taiwan, the handset is widely available across the country. HTC has it available at 88 stores and is selling it for NT$23,999, which is a little less than $800 in terms of US dollars. We wouldn’t expect that to be a one-for-one translation in terms of pricing, but more important if that for now — there hasn’t been anything mentioned in terms of a wider international release.

Aside from the 16GB of storage the HTC One max has a 5.9-inch 1080p display and is powered by a quad-core 1.7GHz Snapdragon 600 processor with 2GB of RAM. The handset also has the UltraPixel camera on back, a 3300 mAh battery, and for better or worse, a fingerprint sensor. The fingerprint sensor works to launch apps, and also keep the phone securely locked.

We reviewed the HTC One max and later did a bit of playing with the Verizon model. Needless to say, the fingerprint scanner didn’t fully live up to our expectations either time. That all being said, while HTC now has the original color of the One max, as well as the Amber Gold model — we have to wonder which color will be coming next.