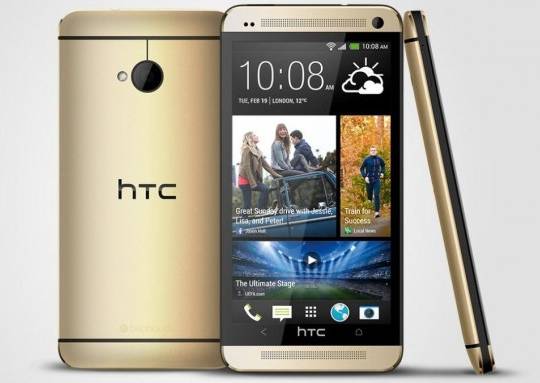 HTC had been showing off an 18-carat gold One a little while back. And while the availability of that particular model was rather limited, HTC has followed up with something similar. They have introduced a “golden” HTC One. The difference here, this one is gold in color and not a full 18-carat like the earlier model.

HTC will have this new golden edition One available in Europe and it will be sitting alongside the previously released Silver, Black, Blue and Red models. Basically, HTC has released another color variant of the One smartphone. Or in other words, this golden edition will keep the same specs and same features as One users have already become familiar with.

While the specs and features may be familiar, HTC is pushing the exterior design for this model. To that point, HTC has said, the “new HTC One in Gold packs the power and acclaimed features of this premium model into a brushed body with black accents that oozes luxury and style.” And for those wondering, the golden HTC One is being pushed as the “glamorous color of the festive season and a must-have for starting 2014 in style.”

Fancy descriptions aside, the golden HTC One will include HTC Zoe as well as BlinkFeed and BoomSound with hardware to include a 4.7-inch display, Snapdragon 600 processor, 2GB of RAM and 32GB of internal storage. The handset will also have Android 4.3 Jelly Bean with Sense v5.5 and the UltraPixel camera on the backside. Otherwise, while HTC has said this handset will be available with a “number of partners” across Europe, there hasn’t been anything mentioned in terms of wider global availability.