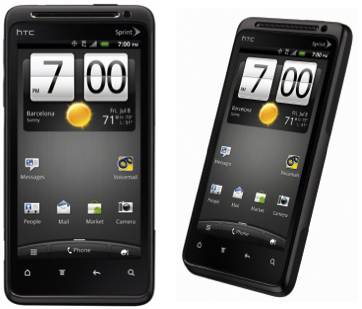 Not content to let Samsung and Motorola hog the limelight for long, HTC has revealed its latest entry in the EVO line. The HTC EVO Design 4G is a 4-inch Gingerbread phone packing WiMAX and world phone capabilities. The phone runs on a 1.2GHz Snapdragon processor, which combined with 768MB of RAM should be able to handle the 960 x 540 qHD screen nicely.

The EVO Design 4G earns its name from its unibody aluminum construction, a trait it shares with some of HTC’s slickest handsets like the Sensation. The press release mentions .47 inch (11.9mm) depth, about on par with other 4-inch smartphones, and considerably thinner than most WiMAX handsets. Some sacrifices had to be made – the 5 megapixel rear camera is midrange, and the 1520 mAh battery will likely take a beating when using the faster connection standard. HTC Sense 3.5, Watch DLNA certification and a 3G/4G mobile hotspot are included.

Other features include the basic WiFi/Bluetooth/GPS combination, and the phone includes an 8GB MicroSD card, though internal storage is currently a mystery. The phone will go on sale this Sunday, October 23rd for $99 on a two-year contract, less $50 for the mail-in rebate. The pricing and size makes the HTC EVO Design 4G a suitable replacement for the EVO Shift 4G, so expect that phone to be discounted soon enough.