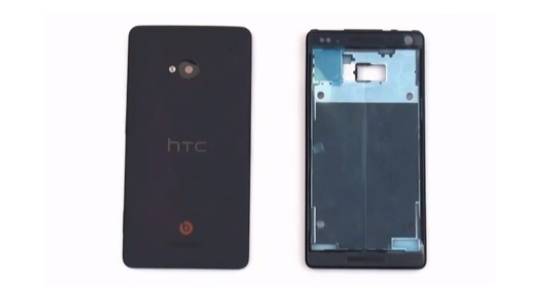 It may have been a few days since we saw the last HTC M7 leak, however it looks like they haven’t stopped coming just yet. As of this morning we are being given another look at the exterior casing. This latest comes as pieces of the M7, as opposed to the complete picture we saw last week. That aside though, this casing does appear to match up with the previous leaks.

While we cannot call it confirmed just yet, it is beginning to seem clear that we are seeing what HTC will announce as the M7. Touching back on previous rumors and the last we heard was that HTC was expected to make an announcement prior to Mobile World Congress — on February 19. Back to this most recent leak — this includes the front and middle housing of the M7.

The video offers a look at the M7 in comparison to several other handsets and it appears to be a departure from the One series of phones. Another look has it side by side with the casing for the Droid DNA. The DNA is a bit taller and not quite as wide and that would seem to line up with previous rumors suggesting that the M7 would arrive with a 4.7-inch display. Another interesting bit coming out of the video is the camera button which sits on the side towards the bottom.

This video also shows another potential difference between the M7 and the DNA, the lack of room for a gasket on the M7 which suggests that the handset will not be water-resistant. Anyway, while this should be a good video to watch if you are interested in the M7, there is still some question as to whether or not this is a regular back or a prototype back. On that note, it was said that the back looked rather plain. There is the Beats logo and a speaker grill, however the FCC ID label is not present. Of course, as was pointed out in the video, depending on where this back cover was designed to be used — that is not necessarily something that has to be in place. That all being said, given the way the HTC M7 has been going lately, we suspect another leak will follow sooner rather than later.