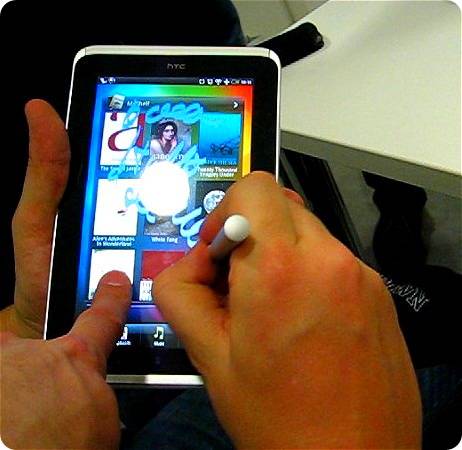 As 2011 marches on we are all slowly learning that this really will be “The Year for Tablets.” With every manufacturer you can think of throwing out an Android tablet, and don’t forget about oh, the iPad 2. With everyone in the tablet game worried they might not be up to par. Like Samsung feeling the 10.1 Tab is inadequate compared to the iPad 2. HTC is just cruising along at their own speed. Launching what we all know as the HTC Flyer. Today we have a video showing a little hands on, and a demo of the Palm-Rejection in action, which allows use of a pen or stylus.

The HTC Flyer will allow users to use a pen for input, also known as a stylus. The issue with this is when your palm touches the capacitive screen while trying to write it throws off the points of contact and it doesn’t work. HTC has introduced Palm-rejection. It is basically the ability of a touchscreen device to ignore the touch of a hand leaning on the screen while a pen or stylus is being used. Officially known as vectoring.

After watching the video, it looks as if the Flyer’s system works pretty good. Hopefully we will get to see more of the Flyer in action soon. Check out the video below and decide for yourself.