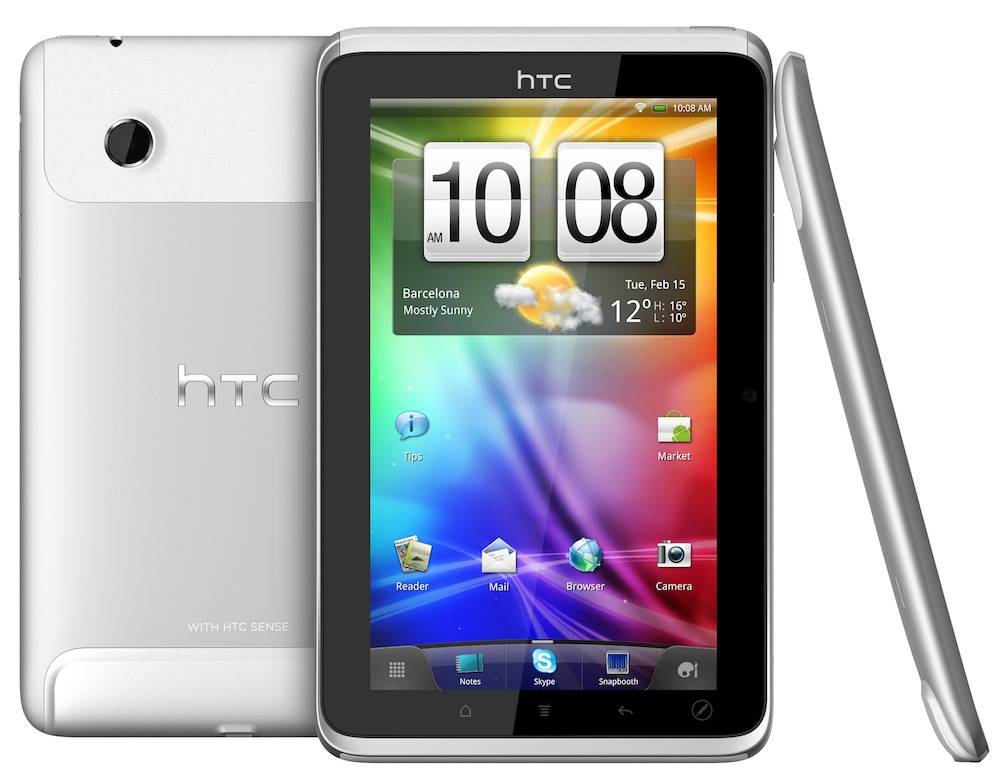 HTC has officially announced its new tablet, the HTC Flyer, at MWC 2011 this week. After the rumors of the past few weeks, the Flyer’s existence hardly comes as a surprise; however, some of the technology decisions HTC has made – including supplying it with an active stylus – are pretty surprising.

Hardware is a slick combination of a 1.4GHz single-core Qualcomm CPU with data-only HSPA+, a 4,000 mAh battery, 7-inch 1024 x 600 capacitive touchscreen and dual cameras, wrapped up in a unibody-style white plastic and brushed aluminum chassis. A WiFi-only version will follow “pretty soon” after the original HSPA+ model, and both have a custom microUSB port which, as well as working with regular accessories, will also support HTC’s new high-power rapid charger.

On top there’s Android 2.4 Gingerbread with a heavily modified version of HTC Sense to suit the bigger display: a 3D homescreen with floating widgets, a carousel layout in landscape orientation, and a 3D grid in portrait orientation. HTC promises a Honeycomb OTA updated “soon after” the Flyer’s launch which, they insisted to us, shouldn’t be impacted by what’s expected to be minimal carrier modification. Even before then, though, there’ll be split-screen apps of HTC’s own making, with a multi-pane browser, calendar, email, address book and other software to make the most of the resolution.

It’s the stylus that really makes the HTC Flyer stand apart, however. HTC has used an unspecified active stylus technology with a battery-powered pen (that has a pressure-sensitive nib and two buttons, defaulting to erase and text-select) and loaded a new app called Notes that supports sketching, handwritten text and annotation of imported photos and clippings. Notes will also record audio, indexing points in the recording with the notes you’re taking at the time, for easier later recall. 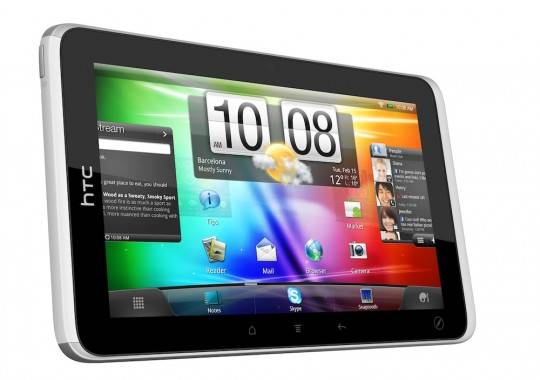 Content stored in Notes can be wirelessly synchronized with Evernote, and HTC expects to release a special touch driver allowing third-party developers to add support to their own apps. HTC user experience manager Drew Bamford told Android Community that the company already has a list of developers who it thinks could do “interesting things” with the Flyer’s hybrid touchscreen technology.

The Flyer will also debut HTC’s new streaming content drive, building on its recent investments in Saffron Digital and OnLive. A new “Watch” app will offer streaming movies and TV shows, while an OnLive app will allow streamed 3D gameplay on the Flyer; using DLNA over WiFi, the Flyer will be able to put OnLive gaming on a nearby compatible TV. Both services are expected to offer pay-per-use and subscription options, and HTC says the same systems are likely to spread to its phones in future.

“We’ve pretty serious about this category,” HTC told us last week, “we’re not just dipping our toe into the water.” The company wouldn’t say exactly what was next, but the message is clear – this is definitely not the last tablet we’ll be seeing from them in the coming months. The HTC Flyer will launch in early Q2 2011, pricing tba (though HTC says it’s aiming for the “high end” to rival the iPad). As for accessories, there’ll be a bundled slip-case with a slot for the included stylus, as well as an optional case which converts into a stand, a desktop dock, and a Bluetooth keyboard.

“Clearly, smartphones have transformed our lives but as we observed how people use smartphones, computers and other technologies, we saw an opportunity to create a tablet experience that is different, more personal and productive,” said Peter Chou, CEO of HTC Corporation. “We are progressing down a path as an industry when people will no longer be in a single device paradigm, but have multiple wireless devices for different needs; this is the direction we are moving.”

Encased in a sleek aluminum unibody, the HTC Flyer tablet exudes the iconic style and build quality HTC is known for. It is also ultra-light, weighing as little as a paperback book, and compact enough to fit in a jacket pocket only. With a seven-inch display, lightning fast 1.5Ghz processor and high-speed HSPA+ wireless capabilities, the HTC Flyer tablet is perfect for those who have been waiting for a tablet that is both compact and powerful.

HTC Scribe Technology on the HTC Flyer tablet transforms traditional note-taking into smart note-taking by integrating natural onscreen writing with thoughtful and integrated innovations. A feature called Timemark enables you to capture the audio of a meeting in line with your written notes, so tapping on a word in your notes instantly takes you to that exact place in time in the audio recording of the meeting. Notes are also integrated with the calendar so when there is an appointment reminder you are automatically prompted with an opportunity to begin a new note or in the case of recurring meetings, to continue where the last meeting left off. In an industry first, the HTC Flyer tablet also features built-in synchronization with Evernote, the world-leading notes application and service.

Mobile Gaming with OnLive
HTC takes mobile gaming to an entirely new level by being the first mobile device in the world to integrate OnLive Inc.’s revolutionary cloud-based gaming service. OnLive is leading in the home gaming market by letting people play top video games on their televisions without the need to buy expensive gaming hardware or software. When integrated fully, the OnLive service will enable customers to pipe the OnLive service through the HTC Flyer tablet’s broadband wireless to their television sets, or let them play directly on the tablet. When integrated on the HTC Flyer tablet, people can play a variety of games, including hits like Assassin’s Creed II, NBA 2K11 and Lego Batman.

Availability
HTC Flyer will be available to customers globally during Q2 2011.