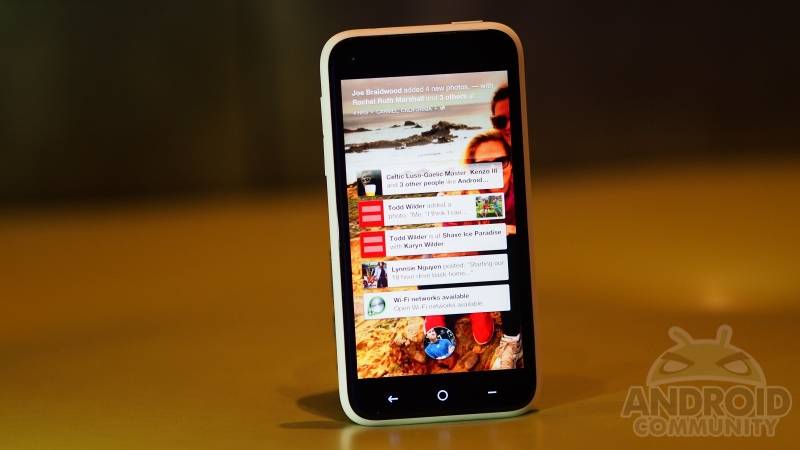 While at first it feels more appropriate to review this device as a Facebook Home experience first and a smartphone standing on its own second, the fact remains: you still have to buy and pay for this machine the same as you would any other Android. So here we go – straight out the box you’ll have a handset that’s rather conservatively sized, ready to fit in the palm of your hand. 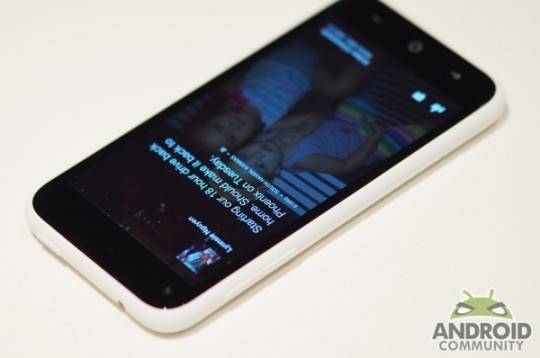 Inside this device you’ve got one of the first appearances of the dual-core 1.4GHz Qualcomm Snapdragon 400 processor, aka Qualcomm 8930AA or MSM8930. This processor is the step after the S4 generation of processors we saw crowned with the S4 Pro that’s sitting pretty inside the LG-made Google Nexus 4 (see our full review now)! One is quad-core, the other is dual-core, and the battle is on! We’ll be doing some comparative benchmarking soon – but for now you’ll still be thinking about the software experience.

Inside you’ve got 16GB of storage and there’s no microSD card slot to expand. Luckily, or so Facebook suggests, you’ll be doing most of your activities online anyway, and there’s always that friendly automatic upload of your photos through your main Facebook app. It’s worth noting that HTC has suggested on their official specifications page that the HTC first has 16GB of storage but that available capacity varies. This could just mean that based on what you’ve got on the phone, you have different amounts of storage (obvious), or it could mean that more iterations of this smartphone are on the way! 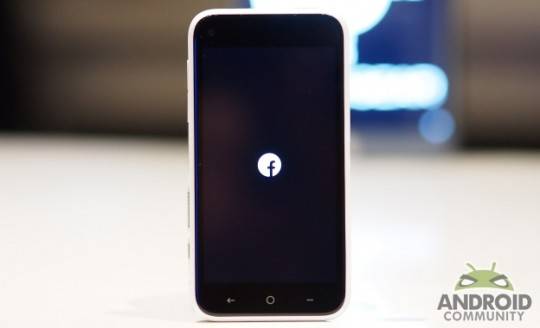 The HTC First has NFC capabilities as well as Bluetooth 4.0 and a 2000mAh battery. It’s becoming more and more common that NFC is included with smartphones across the board. Here it’s set to work with Facebook’s set of check-ins and future placement of Facebook-friendly couponing as well. At the moment we’re happy to have as much wireless connectivity as possible – always nice to be prepared for all eventualities!

We’ve got a whole separate review of Facebook Home prepared for you so you can go as in-depth as you like with its first release. With the HTC First showing of Facebook Home, you’ve got the first in what may be a long line of Facebook Phones, each of them with some added bonuses over the standard Facebook Home download experience. While you can download the Facebook Home home screen replacement app for any one of your Android devices (in the near future), here with the launch of the HTC First you’ll have exactly what both HTC and Facebook intended the fully integrated experience to be.

Head to our Facebook Home software review to see how this user interface will affect your HTC First experience. 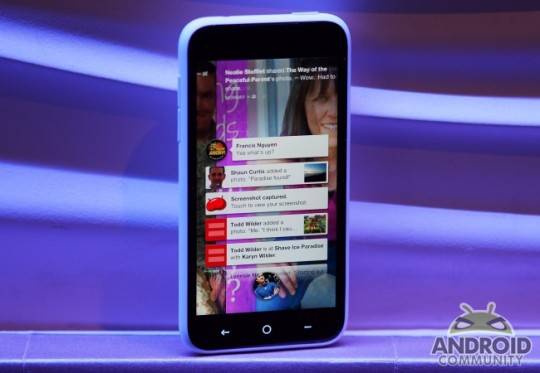 When you first start up your device, you’re invited to sign in with your Facebook account. While you don’t have to do this, it’s plainly obvious that this device was made for people using Facebook in their everyday lives before they pick up the hardware. Purchasing the HTC First with no intention of using Facebook is essentially the same as downloading the basic Facebook app without a Facebook account – it’d be just silly. Again though you can start this phone up and immediately head to settings to turn Facebook Home off – not a half-bad idea if you think the hardware is perfect. 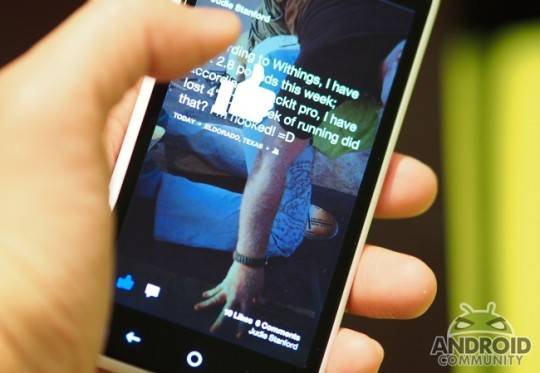 With Facebook Home you’ve got the full Facebook experience, start to finish. You can run the full lot of your Android apps of choice while you live inside the Facebook Home environment – that’s one of the beautiful parts about it. The same is true of a download of Facebook Home for your 3rd party Android device – it runs around your regular apps. The big difference between the app and the HTC First Facebook Home experience is the deep integration you get with the phone. 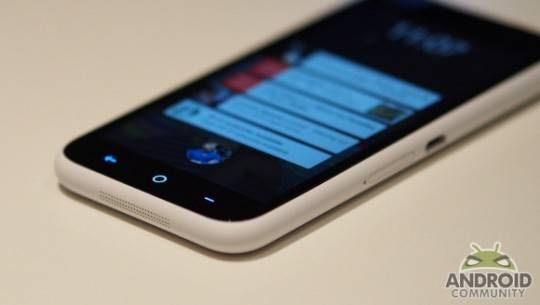 Another serious possibility for the Facebook Home app download is the appearance of advertisements in your basic Coverfeed – that’s the first screen you see when you hit the power button on your phone. While there are no advertisements on your HTC First here at launch and it’s been confirmed that there wont be – at first. Expect a serious bit of uproar if advertisements begin to appear on the HTC First after it launches without them – but again, nothing is set in stone right here and now. 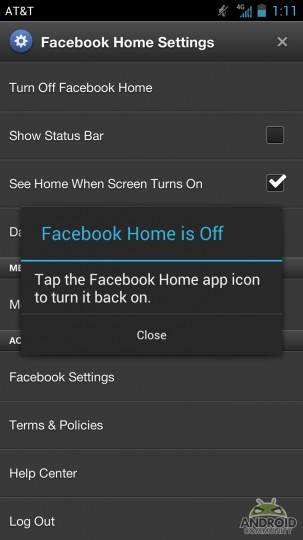 You’ll be working with Android 4.1 Jelly Bean right out of the box with Facebook Home over the top – and you can de-activate it with just a tap or two. Under the Facebook Home skin you’ve got a rather vanilla-flavored Jelly Bean experience waiting for you – this creating a rather enticing situation for those of you looking for an HTC One-era HTC device without the added $100 cost – though without the UltraPixel camera and half a dozen other big hardware differences, it’s certainly not a choice you should take lightly.

Above you’ll see a set of benchmark results from the HTC First. While it’s not the most beefy smartphone on the market today, it’s certainly no wimpy character! You’ll find this device out-performing most of last year’s smartphones with its lovely Snapdragon 400.

Due mostly to the Qualcomm processor under the hood and the power conservation it offers up, you’ll be working a full day with this smartphone without a problem. Though you’ll certainly want to be charging up each night, you shouldn’t have to worry about kicking out the charge cord during the day. If however you’re an insane super power user and like to keep your display at full blast 24 hours a day while you stream 4G LTE video, you can, of course, expect to need a charge after a few hours time. 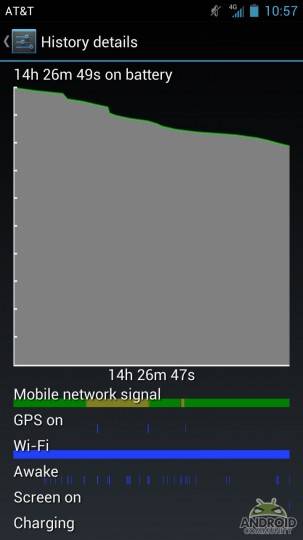 While the HTC First camera experience is certainly nothing to compare to the HTC One’s UltraPixel technology, it’s not the worst shooter we’ve seen this year. With a 5-megapixel camera on this smartphone’s back and a 1.6-megapixel camera on its front, you’ll find yourself shooting photos and video that are perfectly decent. Certainly nice enough to use as your profile photo on Facebook. 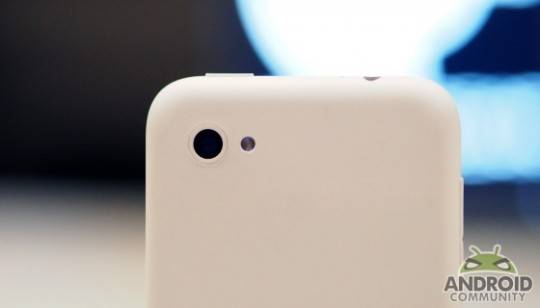 If you’re aiming for even the quality that the iPhone 5 offers (and gasp at the thought of comparing an Android phone to an iPhone on Android Community), you’re going to be in for a bit of a disappointing experience. While the photos and video we’ve captured thus far aren’t worse than the HTC One S or HTC One X (see our full review here), they certainly aren’t better. That’ll happen when you take out the HTC ImageSense processor dedicated to image processing that was in play with the HTC One X and S. 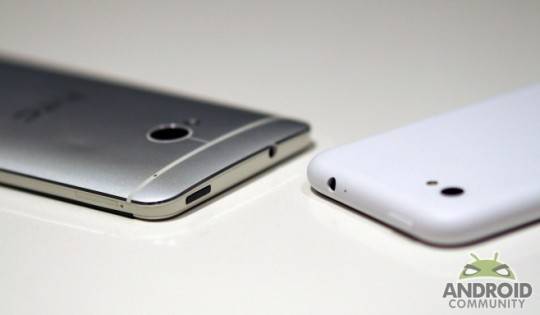 Have a peek at the photo and video examples we’ve got here and stay tuned for more – there’s always the chance that the software on this lovely little beast will be updated by launch time and the whole show flips over. It’s happened before!

Also we’ve got a set of photos taken with the HTC One, then the HTC First, of the same subject matter. See if you can tell the difference.

Above: HTC One / Below: HTC First

With the HTC First you’re purchasing the Facebook Phone. While we’ve compared the HTC First to other devices before, and we’ll do it again, in the end you’ve got what HTC and Facebook have intended to be the one true Facebook Phone. If you do not use Facebook and do not intend on using Facebook, we’d recommend you skip the HTC First. If you’re like one of the massive cross-section of social networking fanatics that does use Facebook on a regular basis and are looking for a smartphone experience that’s all about you and your friends, the HTC First is your ticket to excellence!

The HTC First is the perfect all-encompassing Facebook experience for everyone seeking to stay in touch with friends on the go. Facebook fanatics: this phone may well be your ticket to the next level in true social networking addiction. There’s simply nothing like having Facebook right up in your face on your smartphone 24 hours a day – nothing like it in the world. And with HTC at the helm, you’re guaranteed hardware that can handle the feed.