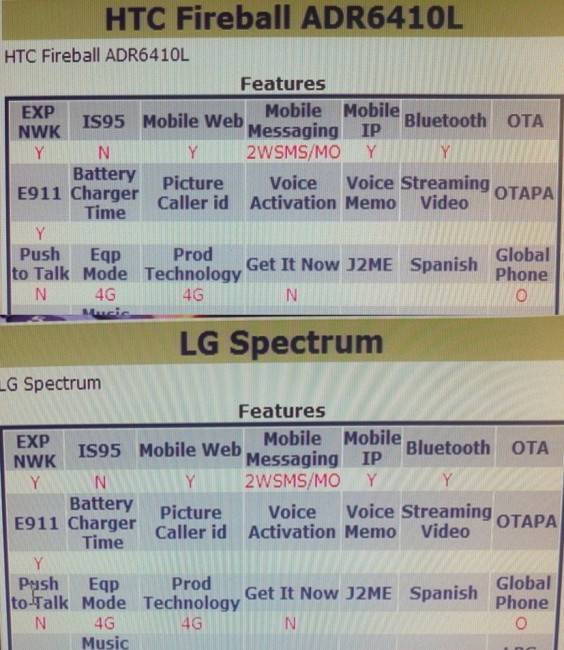 Americans get a lot of cool stuff before the rest of the world, but phones that play nice with international networks is not one of them. Verizon customers in particular have a lot of frustration to deal with, since the CDMA network is totally useless almost everywhere else in the world. There are a smattering of globally operable phones on Verizon, including the DROID 2 Global, DROID 3 and the Incredible 2. But so far there haven’t been any global-ready smartphones that take advantage of Verizon’s LTE network. According to some leaked internal documentation from Droid Life, that may soon change with phones from HTC and LG.

We’ve heard rumors of both these phones before: the HTC Fireball was spotted in Verizon’s apparently leaky computer system, and shots of the LG Spectrum (AKA the LG Revolution 2) make it look like a revised version of AT&T’s Nitro HD. Both of the phones were marked as “global” in the above Verizon listings. That’s great news for global travelers who use Verizon in the United States, as none of the recent high-profile smartphone releases on the network have featured global connectivity, with the exception of the iPhone 4S. And who wants to embarrass themselves while traveling?

There’s no news on when these phones will become available, but if they’re in the system it’s probably a matter of less than three months. Expect more information at CES in about three weeks, with hands-on photos and videos from Android Community if we’re lucky. Keep in mind that “global” doesn’t mean “unlocked”: Verizon’ world phones still incur significant roaming charges, and many international travelers simply opt to buy a cheap phone and a prepaid SIM card for the duration of their travels.