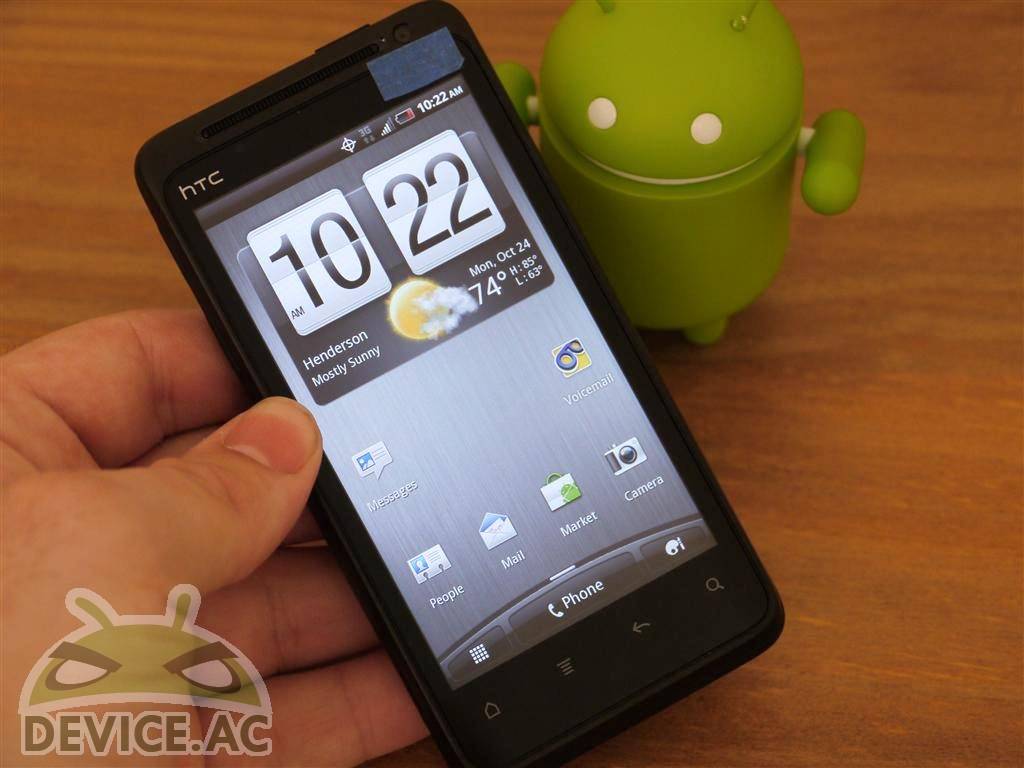 The popular and iconic EVO brand has just added another member to the family this month and that is the new HTC EVO Design 4G. Being the second smallest to carry the title while staying right in the middle with its specifications it should make most users plenty happy. It may not be as large as the big guns like the original EVO but it sure handles its own quite well, not to mention it should only run you a crispy $100 dollar bill. Below we’ll show you a few pictures and our hands-on video and let you decide for yourself if this is the next phone for you.

Now before we get started feel free to look over my hands-on post, then enjoy the goofy hands-on and unboxing video to get you up to speed. 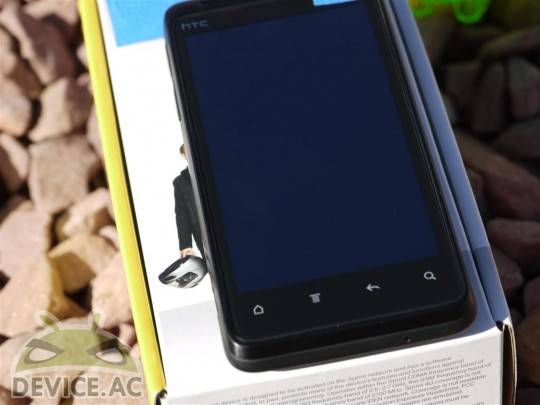 First I wanted to mention the display because it looks great. While it’s only 4.0″ compared to the other popular EVO’s and their 4.3″ displays we do have a qHD here. Higher resolution than the original EVO yet on a smaller screen so it truly looks great. We have a 4.0″ qHD 960 x 540 resolution. The screen does feel a bit thin and tall if you ask me, but shouldn’t be of any concern. Android 2.3 Gingerbread is powered by a 1.2 GHz single-core S2 processor from Qualcomm, all inside a smartphone that’s a mere 4.80 x 2.40 x 0.50 inches in size. 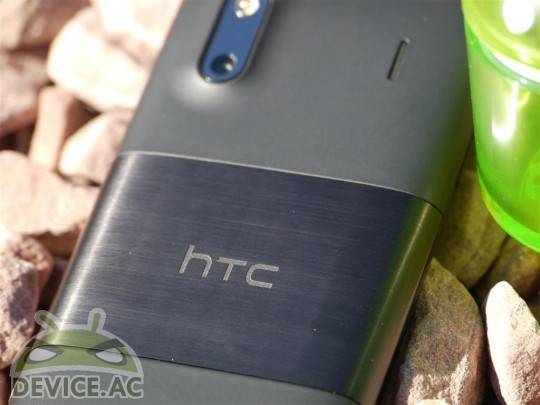 As you can see above, around back we have the usual soft touch matte back that many phones have used as of late — then the popular and sturdy aluminum bezel we’ve come to love from HTC. They are king of the crop when it comes to build quality, everything is extremely durable and solid just as we’ve come to expect from HTC. Down to the bottom we have where the back is removable (with a little extra force) bringing us to the removable battery, and included 8GB micro-SD card. Taking the bottom battery cover off is a bit tricky so good luck and be careful. 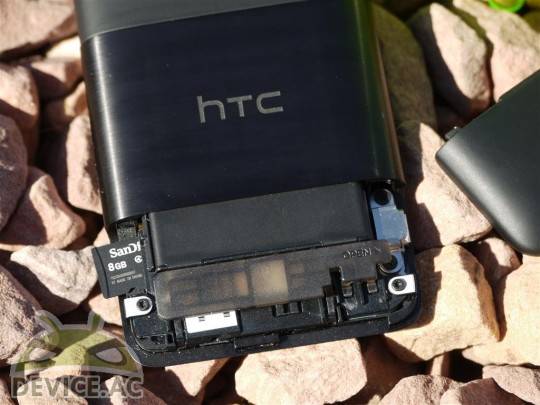 The design is very simple and elegant with the aluminum around back wrapping up front and covering the entire outer shell. The left side has all the action with the micro-USB port and the volume up/down rocker. Nothing is on the right and as usual up top we have the power and wake button, as well as our 3.5mm headphone jack.

Overall I really like the design and build quality, the phone has a very durable and solid feel and if you’ve ever handled the HTC EVO 3D — it is basically the same thing but smaller in this regard. My only complaint with the actual phone is the camera around back, while 5 megapixels is enough and works great it’s the hump and design that is giving me the problem. The phone doesn’t sit flat on a surface and if you try and touch or swipe between homescreens while its laying on your desk it wobbles and is crooked. The camera hump is just too large and should’ve been a bit smaller. This isn’t a big deal but most phones manage to still sit fairly flat. Looking at the photo below you’ll understand why. 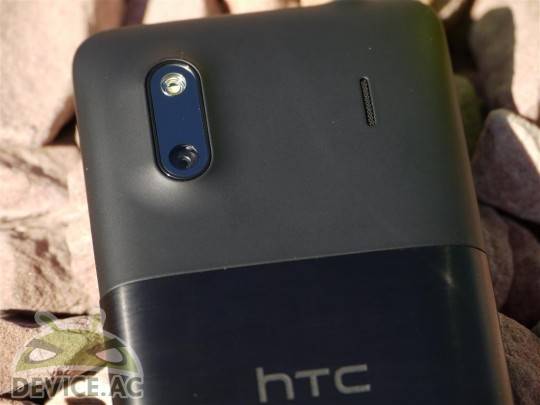 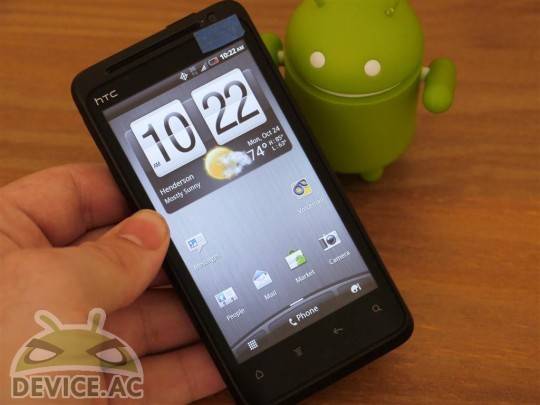 As mentioned above we have Android 2.3.4 Gingerbread as well as the usual HTC Sense UI 3.0 on board. It would have been nice to see Sense 3.5 here but we are equally as happy with 3.0 and the lockscreen ring is still my favorite part — well that and the clock/weather widget of course. HTC Sense UI 3.0 is nothing new so I wont spend much time here although everything is extremely smooth and fluid, as you’d expect with a 1.2 GHz processor powering everything. Bloatware you ask? Other than the usual dressed in Yellow WiMAX apps and Nascar applications we also have FM Radio, Stocks, TeleNav GPS Navigator and a task manager. Everything else is standard with all HTC devices such as HTC Hub and Watch etc. I’m happy to report this is one of those rare phones that didn’t come with any bloatware like most T-Mobile phones we’ve seen lately — We’ll done HTC.

We always like to run a benchmark or two just to see how things are running and if everything seems to be playing nicely together. For a 1.2 GHz single-core phone the Quadrant results were about where we expected, just above 1900 and I tried about 5 times to break 2000 with no luck. This is actually a pretty decent score because many dual-core phones in the recent past haven’t scored too much higher than that. We’ve also ran some Vellamo and Speedtest results to see how well that 4G WiMAX is performing. 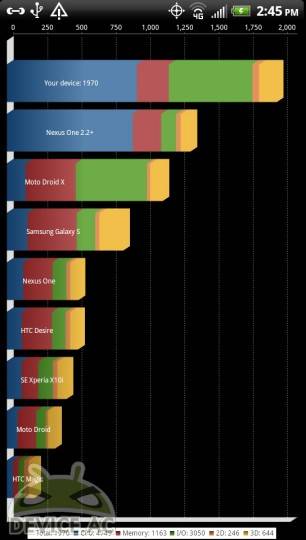 I wont talk much about benchmarks because those that care about those things usually go for the biggest and best from a mobile device and most likely you’ve already bought the EVO 3D. For those that want a well rounded and powerful smartphone that will last through your 2-year contract, this will be just fine. Vallamo benchmark results were a little depressing but part of that was the poor network performance results.

Next up we have speedtests. I might not have the best 4G coverage and WiMAX range but I do live in a larger city (Las Vegas) where I’d expect to have good coverage and a stable quick connection but that just isn’t the case here. Verizon 4G LTE, AT&T 3G and even T-Mobiles new 4G seems to completely win outright here. I’ve achieved over 9 Mbps on average with the new T-Mobile HTC Amaze 4G but was lucky to break 2 Mbps on either 4G WiMAX or the standard 3G here with the Design 4G. Maybe I’ll get a better connection down on the Vegas strip and will have to give that a try soon. 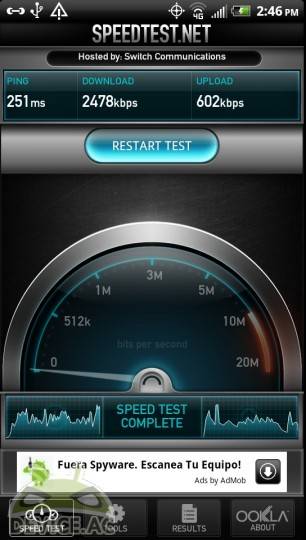 Camera
The HTC EVO Design 4G does have a pretty decent camera for what you pay for. Coming in with a 5 megapixel shooter on the rear with LED flash and a 1.3 MP front for video chat I’ve experienced overall decent camera performance. This is no 8MP camera from the Galaxy S II but for $100 I’d be more than satisfied. Below is one quick sample and you can see a few more in the full gallery below. The camera does offer 720p video recording as well. 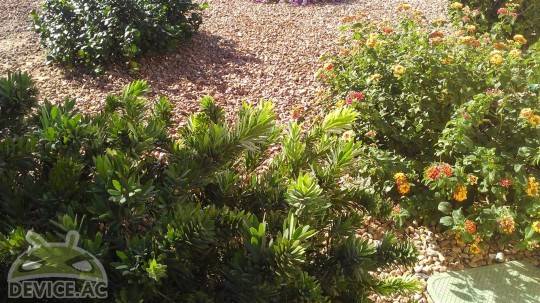 Battery Life
While battery testing is still ongoing because I wanted to try both 3G and 4G separate I can happily say that 3G battery life was quite excellent. We have a 1520 mAh battery with the EVO Design 4G and while using 3G only it was enough to make it through most of the day. One thing worth noting was standby battery. I barely used the phone for a few days and it lasted 2 days and 18 hours on a single charge. For those that don’t use there phone all day long like myself, the EVO Design 4G will last you plenty long. 4G testing hasn’t been quite as fortunate as the constant switching back and forth from 4G to 3G has been taking a toll on battery life.

Wrap-Up
If you are the proud owner of the HTC EVO 4G this will not be the device for you. While the processor is faster and the screen is crisp and more vibrant, it’s a bit smaller and the camera takes a dip too — not to mention we no longer have a kickstand. Instead, for someone coming from, dare I say it, the HTC Hero or even the EVO Shift slider the Design 4G is an exceptional smartphone and would make you proud. 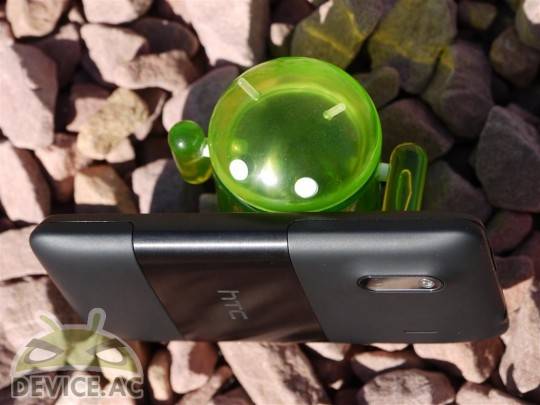 The new EVO 3D may trump the Design 4G because of its dual camera and processor status, but the Design 4G holds its own quite well in regards to the rest of the line up available. Pair that with the 4G WiMAX and the awesomely low price I’m sure many will find this device as the perfect fit. The HTC EVO Design 4G is available now and is only $100 with a new 2-year contract. Or if you’re feeling cool go snag it from Amazon Wireless for just $30. Enjoy the rest of the photos in the gallery below and be sure to let me know if you have any device specific questions.