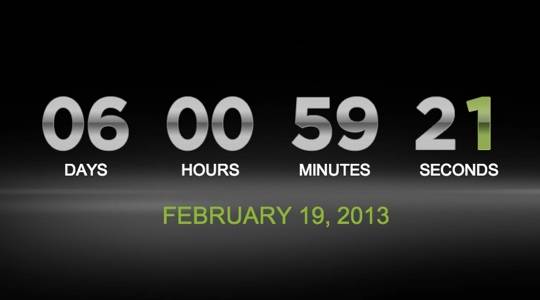 Continuing with the teasing, HTC has posted a countdown timer as a lead to their February 19 event. The clock, which is currently sitting at a little over 6 days is also highlighting something else that have recently learned. Something dealing with the name of the device we suspect will be announced. If you pay attention to the timer, the final number 1 is always highlighted in green.

This just goes to give a bit further evidence to the recent reports about the HTC M7 actually being the HTC One. What would be really interesting is if HTC released a special limited edition color of the HTC One in that green. Of course, perhaps better than hoping to see a limited edition color — we should hope that HTC really nails it with this device. After all, with all this teasing, not to mention the abundance of rumors, HTC seems to be sitting on a dangerous edge.

The key here, while we have talked quite a bit about the HTC M7, now the HTC One — the only part that has been confirmed is that HTC is having an event on February 19. Well, that and the event will actually be taking place in both New York and London. Otherwise, YouTube user gaurav2328 has spliced a bit of the imagery from behind the countdown timer into a video. You can take a look at that below, however it is just brief looks. You can also see those same pieces in the actual countdown timer, just watch and look for the flashing when the final digit in the seconds reaches a one.

Aside from the HTC teasing and the event, the details for the phone are still unconfirmed. Based on previous rumors however, we are expecting the HTC One to launch with a 4.7-inch 1080p display, quad-core 1.7GHz processor, 2GB of RAM, 32GB of internal storage, a 2300 mAh battery, 2 megapixel front-facing camera and Jelly Bean with Sense 5.