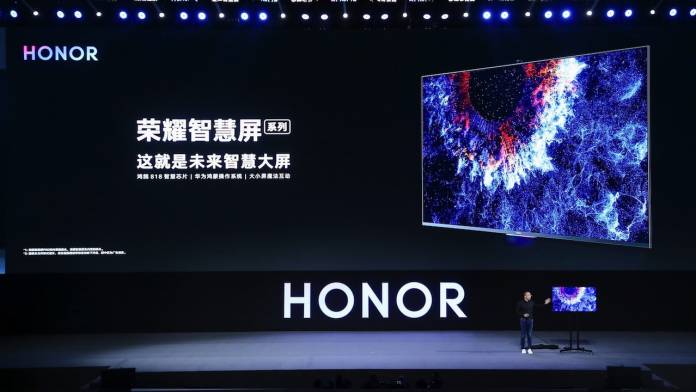 The idea of Honor going into the smart TV business has been mentioned before. It was only one time but now we can confirm Huawei’s sub-brand has officially ventured into the smart home arena. The Honor Vision Smart TV was announced over the weekend at the Huawei Developer Conference (HDC 2019) in China. This device holds the “honor” of being the first commercial product available running the new HarmonyOS. As we’ve already mentioned, the Harmony OS aka Hongmeng OS in China isn’t only intended for smartphones. It can also run on different smart devices and wearables.

Honor Vision boasts an AI Camera NPU processor and the Honghu 818 Intelligent Display chipset–both from Huawei. You can say this is the first Harmony OS-powered smart product from Huawei. It’s not only a new smart television model. It can work as an entertainment center and management center where you can control other smart devices in the ecosystem.

The smart screen doesn’t run Android so we won’t categorize this as an Android TV. It’s a Harmony TV that is designed to work with other smart speakers, in-vehicle devices, smart screens, and smartwatches in the near future. The idea sounds promising but we’ll have to wait and see until other HarmonyOS-powered devices and smart products are introduced to the market.

At this point, Harmony OS will definitely be available in China as Hongmeng OS. The goal is to bring a more cohesive and consistent experience across most Huawei and Honor devices. It will be an open-source platform so other OEMs are also encouraged to use the platform.

HarmonyOS is an obvious alternative to Android although we’ve been saying it’s not. The goal, really, is to make a more intelligent experience across all devices and not just for one. Android has been trying to do this but still with numerous limits and differences. Samsung also has the Galaxy ecosystem.

Honor Vision Smart TV comes equipped with 1.7Gbps dual-band WiFi, smart pop-up AI camera, and artificial intelligence. The Honor Vision standard model bosts RMB 3,799 which is around $537. A Pro model will be ready at RMB 4,799 which is some $679 USD.